Mcolisi Sgubhu Nyoni and Mphostoli Masilela were shot dead by a police officer merely for rebuking King Mswati’s Throne and the ongoing killing of Swazis by his security forces.

The incident happened in the early hours of Sunday at Lomahasha, KaTolo area during the funeral of businessman Peter ‘Peters’ Mashaba’s brother Joshua Mashaba.

Reached for comments, Sifiso Nyoni, a brother to Mcolisi confirmed the death of his brother adding that he was killed merely for expressing his opinion and rebuking the King for killing Swazis, dozens have been killed in eSwatini for demanding democratic reforms.

“Actually, there was a discussion and criticism directed to the King, an innocent child was previously shot and killed here at Lomahasha during a protest by the very same police officer. So some residents were questioning him about that and indicating that they don’t want the King anymore because he is killing us.My brother was among those who were discussing the political situation in the country during the funeral and after hearing their sentiments, the police officer went back to the police station to take a gun and subsequently killed the two of them including Mcolisi”,he said.

Efforts to reach Mphostoli Masilela’s family proved unsuccessful at the time of compiling this report, his father’s phone was answered by a family member who asked to be called later. 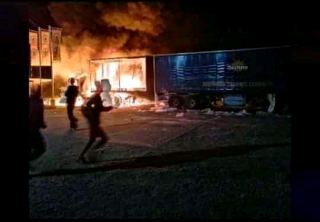 Speaking to this Swaziland News, Ndumiso Masimula, the Lomahasha Member of Parliament(MP) said the incident shocked him such that he was even struggling to talk about it, he wondered why people could be killed in this manner during a funeral.

The continuous shooting and killing of civilians by King Mswati’s security forces comes at the time when eSwatini is facing a political crisis and growing calls for democratic reforms, the Government and the King denied killing civilians.

Superintendent Phindile Vilakati, the eSwatini police Spokesperson had not responded at the time of compiling this report.

“It is for this reasons that the police killed the two because there is an order that all those who are opposed to the King must be killed”, said the PUDEMO Secretary General.