"She Hid my Phone Under Her Thighs That Why I Threw Her Out ", Man Gives Reasons

By TheMice (self media writer) | 5 days ago

Since Monday, 22 November, a video of a guy pushing a woman out of his Mercedes-Benz V-Class has sparked outrage on social media. Others stood up for the man, despite the criticism he received. 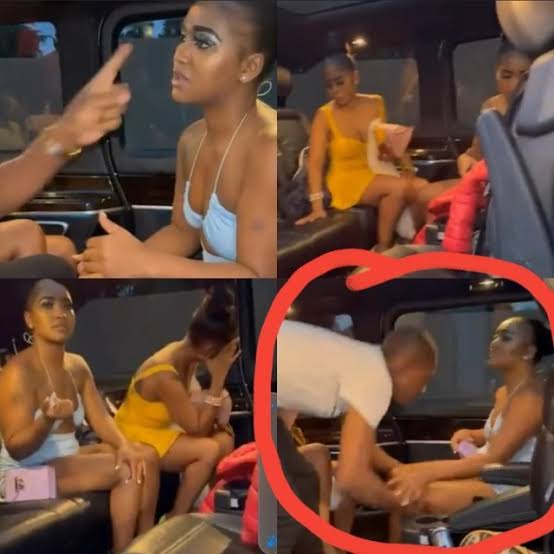 He later moved to Instagram, where he went by the name Njabulo, to explain what had transpired.

Some women got in his car, and one of them started behaving rudely toward him.

Initially, she tried to steal my phone. Nothing came out of her thighs when we went looking for it.

Even though the woman tried to steal his wife's pricey lotion, Njabulo kept silent about it. However, when she told him that his car was inexpensive, he became enraged. He admitted that the woman was the worst passenger he had ever had, despite the fact that he gave rides to many individuals.

As soon as she got out of her car, she removed her shoes and sat down. Food and bubbly were in the car for me to enjoy. Indulging in some bubbly while devouring her dinner.

Afterwards, Njabulo claims she sprayed champagne on the car and demanded money from the driver.

We have money, and we must pay those who owe us," she responded when her companion inquired about it.

He claims he only shared the video with a few people, but it quickly became viral.

It was Sizwe Shabalala's opinion that "Njabulo did well because the lady reporting a phony crime to the police would have had him in trouble."

You should always treat people's cars with respect if they're willing to lend a lift, Lora Zulu advised.

'He should not have grabbed her like way,' Samantha Kobus said. That, in and of itself, constitutes abuse."

'This Is Very Sad Indeed:A 16 Year Old Girl Passed Away After This Happened To Her