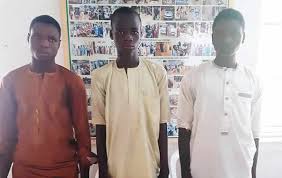 Three suspected kidnappers were apprehended by the police in Kano State yesterday in the Sharada quarters of Kano Municipality.

A statement provided to DAILY POST by DSP Abdullahi Haruna Kiyawa, spokesman for the command, confirmed the arrest in a statement.

He explained that the arrest was made in response to a report received from a resident of Kwanar Ganduje, Sharada Phase II Quarters, Kano last month, who claimed that he had been contacted and threatened on the phone to pay the sum of Two Million Naira (N2,000,000:00) or else he or any member of his family would be kidnapped. He said the arrest was made in response to the report.

He explained that following the complaint, CP. Sama'ila Shu'aibu Dikko (the Commissioner of Police) raised and instructed a team of detectives to track down and arrest the perpetrator.