Father Who Poisoned His 3 Kids Dies In Hospital

By TsepoNews (self media writer) | 2 months ago 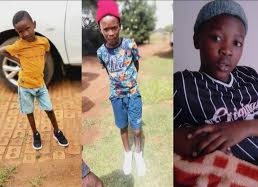 The 39 year old father who allegedly poisoned his sons has been reported dead. The man was in hospital after he had attempted to commit suicide.

According to police the man died in hospital on Friday. He was in hospital he was being guarded by the police as he had been facing charges of attempted and murder.

The accused had allegedly given his five children energy drinks that were laced with poison. One of the children did not drink the energy drink, while four of them consumed the drink, which killed 3 and landed 1 in hospital.

The 3 children were buried on the 4th of June. The 1 child is still believed to be in hospital.

According to reports the father waited for the mother of the children to leave for work when he then offered the children energy drinks that were laced with rat poison.

Congratulations pour in for Faith Nketsi and her husband as they welcome their first child together.