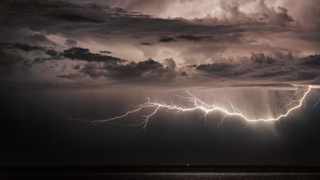 Cape Town – A significant rainstorm is relied upon to affect the focal pieces of the Western Cape from Thursday evening into Friday.

The South African Weather Service (SAWS) is cautioning that problematic precipitation can be anticipated in the Garden Route, Central Karoo, Cape Winelands and Overberg (east of Ceres and Robertson), the Western Cape Local Government, Environmental Affairs and Development Planning Department said in an assertion.

The SAWS projects between 20 to 30mm of downpour, solid windy breezes, extreme lightning and a lot of little hail.

Neighborhood Government, Environmental Affairs and Development Planning MEC Anton Bredell says the locales to be influenced incorporate a portion of the most noticeably awful dry spell stricken regions in the Western Cape.

"We desire to see the great downpours give some invite help in such manner, yet should caution general society about the high probability of serious disturbances because of the seriousness of the tempest.''

"Confined flooding/streak flooding of powerless streets, low-lying regions, and scaffolds including mountain passes, for example, Meiringspoort Pass because of weighty deluges might happen.

''We ask the general population to utilize outrageous alert when going around the influenced districts for the following two days as conditions might be perilous and to abstain from being outside however much as could be expected."

Individuals from people in general are asked - in case of any crisis - to contact the crisis benefits right away. The most straightforward number to recollect is 112. This is a complementary number and can be dialed from any cell.

Extra provincial numbers for detailing crises in the Western Cape: