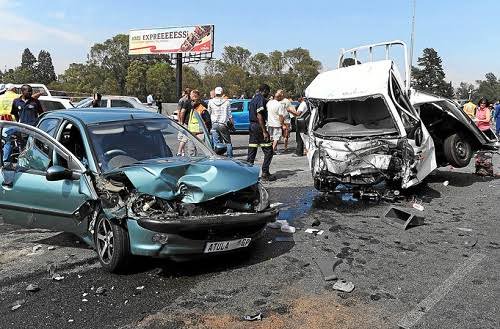 Two females and two children between the ages of six and seven were killed on the spot, according to the accident report. The automobile toppled as a consequence of a tyre blowout."

According to Sello Lehari, the North West Transport MEC, "the three persons who survived with injuries have been taken to hospital."

"It is really terrible to lose four persons in a single disaster."

It was his recommendation that drivers pre-inspect their automobiles before embarking on the road.

"The weather has changed, and it is quite hot on the roads these days."

As a result, it is critical for drivers to do a pre-trip inspection of their cars before hitting the road.

Inspect your car to ensure it is roadworthy.

An investigation into a case of capable homicide has been launched.

Medics in Mpumalanga reported seven males between the ages of 25 and 35 perished in a terrible head-on accident between a cab and a truck on the R545 between Bethal and Kriel in the early hours of Sunday morning. The crash occurred between the towns of Bethal and Kriel.

"There were no indications of life among those that were discovered, and they were all certified dead upon arrival."

There were no injuries to the driver of the truck during the event.

An unrelated incident occurred on the R554 in Newmarket, Alberton, when a six-year-old kid was flown to a local hospital after being struck by a car.

According to police, the kid was discovered laying on the gravel shoulder of the road, suffering from many serious injuries.