A taxi boss is currently in hiding after surviving a hail of bullets.

"I was shot nine times, in both arms, twice in the head, in my shoulder and torso. Eighteen bullets fired from a “machine gun”.

These and other startling details have emerged about how assassins tried to permanently erase the life of Eastern Cape taxi boss Gabs Mtshala, in the streets of Vincent in East London on Thursday September 16.

Mtshala, hit nine times by bullets, survived the attack and after being secretly moved out of the province while fighting for his life has spoken for the first time in an exclusive interview with the Weekend Dispatch.

His arms still swathed in bandages and plaster and with dark weals showing healed bullet entry points, the chair of the Mdantsane East London Taxi Association said he was still in hiding because of violence that was continuing behind the scenes.

He provided details of how the violence had erupted only metres away from where he and other top-rank taxi bosses had met transport MEC Weziwe Tikana-Gxothiwe.

Mtshala said two bullets had hit him in the head, one in the shoulder, and six more had smashed into his arms and torso.

“My body has taken the hit big-time, but 80% of it has recovered. Both my arms are still in plaster of Paris.

“I’m still in hiding because the situation is volatile given what has been happening behind my back after the attempt on my life. What’s worse is that we don’t know who is behind this attack,” Mtshala said. 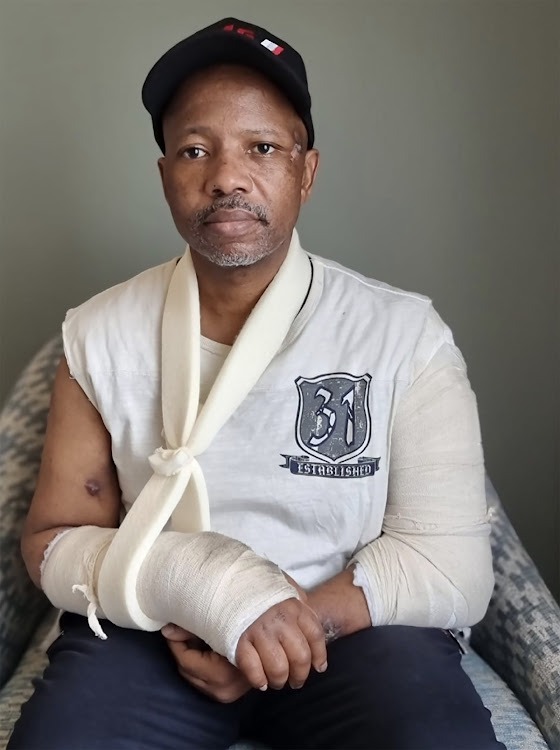 He said on the day of the shooting they had wrapped up the meeting with the MEC and other taxi industry role players.

“I was still inside because I had some personal issues to clear out with the department, that is the issue of licences for the Hlokomela [scholar transport] vehicles. I needed to sort out some licence issues for some of my vehicles.

“We crossed York Road into Lee Road, and when we were about to reach his [colleague’s] car, I heard loud bangs and I knew they were gunshots. I was hit, but it had not registered in my mind yet.

“I looked back and I saw this white bakkie with dropped windows and this man carrying a machine gun. It was not a pistol. And suddenly more shots rang out,” he said.

“The bakkie was moving slowly and I knew whoever they were, they meant business. They wanted to make sure I was dead. When I took cover it was already late because I was hit by several bullets in both my arms and twice in the head, but the bullets did not hit the vitals,” Mtshala said.

He said he had fallen and crawled to the side of the car, but his colleague — the one who had been walking with him to his car — was not there.

CONGRATULATIONS|MaMkhize honoured with a Doctorate