She contends that her child didn't should be shot after he had as of now kicked the bucket during an equipped burglary in Houston. Many individuals are upset by this and are uncertain of how to feel about violations of this sort in light of the fact that, luckily, her child was the person who was doing the heist at that point. The burglary was done by her child. 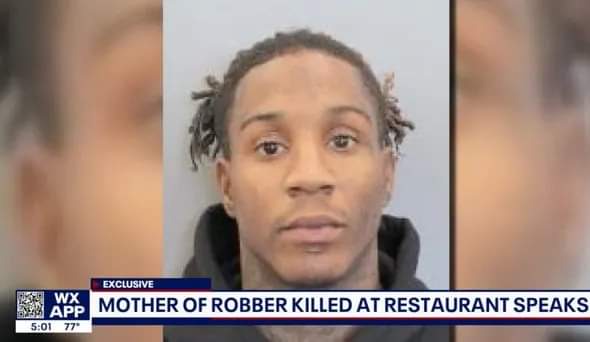 They don't know whether to feel frustrated about this mother who has lost her child or until the end of society, which is ceaselessly being threatened by hoodlums. Thinks regularly pull off carrying out a large number of unlawful ways of behaving in light of the fact that they wouldn't fret doing as such.

There is no likelihood that he might have endure the misfortune, where he was shot multiple times. The young fellow was in a real sense strolling all over inside the café waving his firearm at the supporters and requesting that they give up their valuable merchandise in general, so the assailant rose up out of a seat. He was shot multiple times by the assailant during the experience, and he got no opportunity of getting by.

He didn't see a man approach with a pistol and shoot him from behind; by then, he endeavored to run away from the area; by and by, the man proceeded to shoot and drew nearer, shooting him on different occasions until killing him in that. There was obviously full self-preservation, and the criminal behavior could never have been legitimate in any capacity. Since the situation was gotten on camera, many individuals accepted that this individual would have to deal with significant criminal penalties. In any case, clearly there was positively not an obvious explanation for the unlawful movement.

The mother of a Houston eatery looter who was shot and killed by another benefactor guaranteed that the shooter over and over "mishandled" her child at that point. The client shot the cheat dead.

"I don't can't stand this man. I reserve no option to be furious with him." Corine Goodman referenced the client who should remain anonymous in a new meeting that she provided for the station. "Notwithstanding, I'm asking why you didn't end it. I will not be outraged assuming you needed to kill him on the off chance that you needed to. I can acknowledge it, that much is valid. He has an obligation of some kind or another. As far as I might be concerned, that seems OK. Then again, for what reason would he say he was shot multiple times in the back as he was escaping, and afterward one more multiple times while he lay on the ground? You treated him brutally. He was at that point perished. Also, it hurt. That harms so terrible."