Here Is Why The Corrupt Metro Cops Deserve To Be Punished 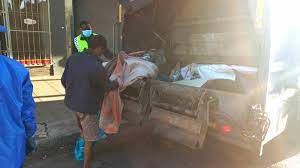 A few inhabitants have added their furious voices to a groundswell of dissatisfaction with regards to the police activity in which authorities purportedly constrained vagrants to dump their covers in an anticipating garbage truck.

Occupants said the police's activities were especially upsetting as winter was drawing closer.

Police seemed to have been leading an activity to attempt to get gatherings dozing outside organizations in Gale Street to move, as indicated by a post on the Umbilo Community Forum Facebook page.

While it was well realized that the country's economy required a circle back and organizations required all the assistance they could get, discarding the covers of vagrants before the beginning of winter was obtuse, said Shani Wood, who runs a NGO in Durban.

'Try not to let tikkop and his father move back in'

Wrongdoing, grime and defilement in business regions tended to by KwaZulu-Natal organizations

Durban Metro Police eliminate the destitute during a tidy up activity during which the covers of the destitute were discarded. Picture: Supplied.

"Moving impeded people starting with one region then onto the next has neither rhyme nor reason. How about we track down a drawn out maintainable arrangement. There are lives in question. If it's not too much trouble, team up with the numerous non-benefits that will help!

"Ultimately, unquestionably the uncaring activity of removing somebody's sweeping affectionately given/given to them as we head into winter is simply contemptible," Wood said.

To exacerbate the situation, she said the police were fixing crafted by committed NGOs in the city, who have given a large number of the covers that were discarded during the activity.

A screen capture of what an inhabitant needed to say regarding the episode.

Metro police representative Parboo Sewpersad denied claims made against the police and said that the picture was controlled to cause individuals to accept that the police played a part in discarding the cover.

He let IOL know that the man told police "he was fed up with being moved and needed to discard his stuff and leave".

He said the activity was directed in light of the fact that police get various calls from entrepreneurs, saying that individuals are dozing at the entry of their shops.

"The city has been doing tidy up tasks for a long time. A contributor to the issue is vagrancy, and the NGOs are empowering this sort of conduct on the road as opposed to taking them to asylums and homes.

"So on the off chance that there was an issue, somebody should come to the police and record a sworn affirmation on what they saw.