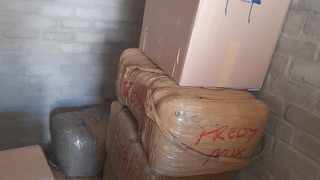 CAPE TOWN - A 44-year-elderly person was captured on Monday after individuals from the Directorate for Priority Crime Investigation (birds of prey) made a R4.1 million medication bust.

As per the Western Cape representative for the Hawks, Zinzi Hani individuals joined to the Hawks' Serious Organized Crime Investigation group along with Crime Intelligence's Counter Narcotics and Gangs in the Western Cape responded to data got about a vehicle consistently visiting diverse storerooms in the Durbanville region and supposedly shipping compacted dagga in the Brackenfell region.

"The said vehicle was observed and spotted leaving the two storerooms. The joint police group halted and looked through the vehicle with one inhabitant inside.

"Packed dagga gauging 20 kilograms was found in the secondary lounge of the vehicle," Hani said.

She said the driver of the vehicle was returned to the storeroom by officials.

Cybercrimes on the up, with SA every year losing about R2.2 billion

Cops salvage in excess of 30 dealt with Ethiopians Midrand

Hani said upon appearance further examination prompted the revelation of another extra room in a similar office.

"The two storerooms were then opened successively and more packed dagga were found.

"This seizure went to an absolute road worth of more than over R4.1 million," Hani said.

The suspect was therefore captured and deals with indictments for managing in drugs.

He is relied upon to show up in the Kuilsriver Magistrate's Court on Wednesday.

Families of trapped Lily Mine workers mark 1,000 days camping outside the mine