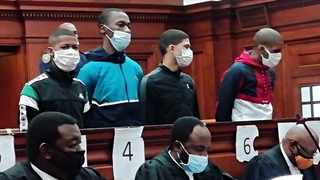 Cape Town - Dawnay Davids, 19, Mahlubandile Jacobs, 26, Moegamat Swarts, 26, and Vincent Davids, 28, showed up on Thursday in the Western Cape high court on various charges, including murder, supporting and abetting group of thugs movement, unlawful ownership of a gun and illicit ownership of ammo.

The four from Uitsig, are blamed for effectively partaking in group of thugs movement and being individuals from a pack called Ama Dont Care working in the Uitsig region.

The state claims that on March 26, 2019 in Uitsig, Davids and Jacobs shot dead Christopher Joubert, 46, and his four year-old granddaughter Likeshia.

The indictment said a day prior to the killings, Joubert was drawn closer at home by Jacobs, Davids and two different men, where they requested cash from him.

On March 26, 2019, Joubert and his granddaughter were outside their home in Geranium road.

Likeshia was playing with different youngsters around a bakkie.

Davids and Jacobs strolled past the gathering of individuals towards the side of Geranium Street, where one of them got back to the gathering and started shooting at them with a gun.

Joubert kicked the bucket from shot injuries to the head and chest while Likeshia passed on from gunfire wounds to the chest.

Glenda Ruiters, a 56-year-old observer to the killings was subsequently shot in the head, mid-region and chest, and kicked the bucket.

Jacobs, Swarts and Davids have been accused of her homicide.

The indictment accepts Ruiters was killed in light of the fact that she was probably going to give material proof with respect to the homicide of Joubert and Likeshia.

The three men have been accused of the endeavored murder of Ruiterss little girl Nikita Ruiters.

Supporter Liezel Schlzel showed up for the benefit of the State, while advocates Andr Pienaar and Mike Pothier addressed the denounced.

Cyril Ramaphosa Has Been Made Royal Chief In Cote d’Ivoire