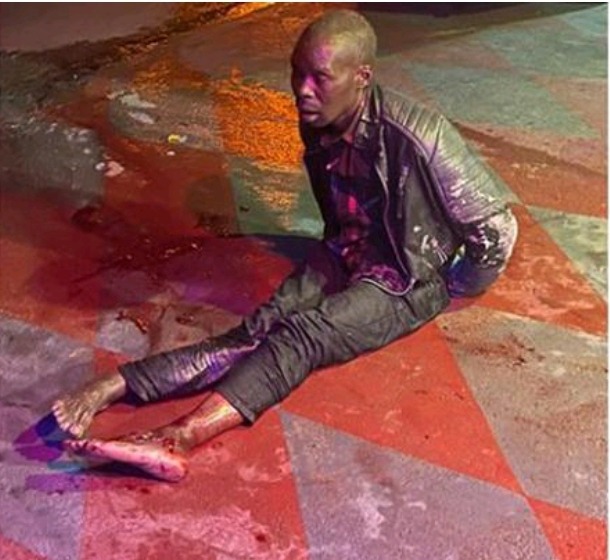 In what would have been an incident where an armed robbery had occurred at Beitbridge border where an AK-47-weilding suspect was knocked by a vehicle which subsequently disabled him because of how the driver of the vehicle was persistent, despite having already knocked him down it is believed that he drove several metres before he stopped his vehicle while the suspect was under the car.

This shows us nothing but the fact that ordinary members of the public are pretty much tired of the perpetrators of crimes who are always terrorizing them on the roads, this type of behaviour is something that has to stop immediately because right now people are struggling with perpetrators of crimes on a regular basis, right now the suspect is disabled for life and how else is he going to find a way to make a living right now he has completely disadvantaged himself and affected his life.

The armed robber, named Obey Mhuru was quickly admitted into hospital for further medical intervention after he suffered from pains all over his body. He is currently under heavy police guard at Beitbridge, this should serve as a reminder to those who are known to perpetrate robberies around the country especially taking advantage of the hapless truck drivers and people who would be traveling at the Beitbridge border.

Moyo flattened his foot at the accelerator while pointing the vehicle towards the stranger and hit him with the vehicle, however the suspect was trapped under the vehicle so the owner kept driving until the suspect was badly wounded to an extent where his family members are really concerned about him.

By the time the law enforcers who were dispatched to the crime scene arrived on the scene they discovered that the victim was completely immobile he couldn’t use his legs and he couldn’t crawl with his hands, because he was badly hurt and was in serious pain that they had to call emergency services in order to assist him, he was dragged by the car for about 40-50 metres and was dumped outside the gate.

The police also discovered that the suspect was in possession of crystal and it was found lying next to him where he couldn’t get up and he confessed that he stole the pistol from a vehicle in the town.