We were guaranteed health advantages however those guarantees have not been satisfied," says 67-year-old Edward Nqumse, who was attacked and shot in the leg and chest by police in Phola Park, Thokoza, in 1993. 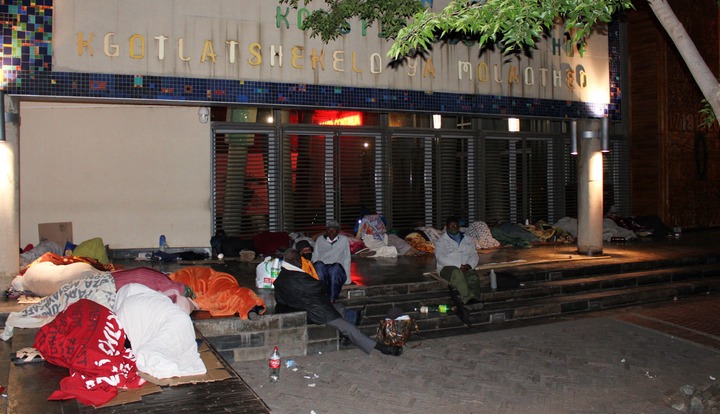 Nqumse got R30,000 as pay at that point, yet says the cash has since run out and he can presently don't bear to pay for progressing costs like agony prescription.

Nqumse joined 90 Khulumani Support Group individuals who went through two evenings outside the entryways of the Constitutional Court in Johannesburg last week, requesting repayments for common liberties infringement under politically-sanctioned racial segregation. Khulumani was set up to address and support around 104,000 casualties of politically-sanctioned racial segregation and their families.

A large portion of the people who dozed outside the court come from regions in the East Rand including Katlehong and Phola Park, where there was serious brutality somewhere in the range of 1990 and 1994.

As indicated by the Truth and Reconciliation Commission's (TRC) report, occurrences in those unstable regions notwithstanding "train viciousness, taxi savagery, struggle between municipality occupants and lodgings, and between ANC self-preservation units (SDUs) and IFP self-assurance units (SPUs)" which brought about numerous passings and wounds.

Angeline Sithole, a Khulumani part, said there was likewise viciousness between various ethnic gatherings at that point. "There were continually weapons going off. The region where I resided in Katlehong was so fierce, it was alluded to as an off limits region," she said.

Last week, the gathering of for the most part old Khulumani individuals sent a notice of their complaints to the workplace of the President and Minister of Justice. Remembered for the notice was an interest for the public authority to address the "incomplete business of the TRC" by paying repayments to each and every individual who experienced basic freedoms infringement under politically-sanctioned racial segregation.

Nomarussia Bonase, Khulumani's Gauteng executive, said no administration authorities or delegates met them when they showed up at Constitution Hill. "We chose to leave in light of the fact that a significant number of us were down-poured on the night prior to, our things were wet, our food was running out and authorities at Constitution Hill were not allowing us to utilize their latrines," she said.

Bonase said they are yet to get a reaction from the Presidency and the Ministry of Justice.

An old lady, who requested to not be named, told GroundUp, "A considerable lot of us are debilitated, yet they leave us with no decision except for to rest outside exposed.

"Last year, we picketed and rested external the Union Buildings in Pretoria. Authorities in the Presidency and the Ministry of Justice said they would organize a gathering and follow up desperately on our requests. It's a year after the fact and we are as yet pausing," she said.

As per Bonase, many records of episodes during politically-sanctioned racial segregation have since been lost and the instances of numerous ladies who were assaulted by politically-sanctioned racial segregation police were never managed on the grounds that the TRC did exclude assault as a political wrongdoing that certified for absolution and compensations.

Khulumani individuals likewise said they are disappointed that the President's Fund — cash which should be utilized for compensations — is "sitting and aggregating revenue" as opposed to being paid out to individuals who experienced denials of basic liberties during politically-sanctioned racial segregation.

Questions sent by GroundUp to the Presidency and Department of Justice were unanswered when of distribution. DM

Journalist's Tributes pour in for the late Poloko Tau

Check as Nimrod from Skeem Saam shows off his beautiful girlfriend

Sets out up toward 350 award recipients