After burning uMphakatsi on Thursday afternoon, residents of Mkhitsini proceeded to burn Chief Mfukama Mndzebele’s home in the early morning hours on Friday.

This comes after the Chief allegedly shoot and killed his brothers son Mondli Mndzebele in a dramatic land dispute that saw residents mobilizing themselves attempting to kill the Chief.

The unresolved land dispute was before Nhlangano King's Liason Officer (Ndabazabantu) and had dragged for years. 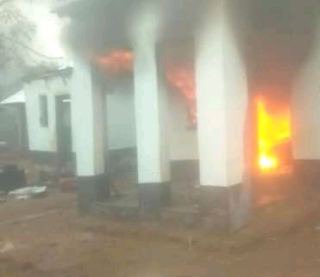 Speaking to this publication, Mcoleleni Mndzebele, a brother to Mondli who was allegedly shot dead by the Chief, confirmed the shooting adding that the community members were angry with the Chief resulting in the burning of three homesteads by an angry mob from the area.

"People were so angry and wanted justice and a police officer who was not in uniform also got shot in the leg",said Mndzebele.

Superintendent Phindile Vilakati the police Spokesperson had not responded to our questions at the time of compiling this report.

Eswatini is in a midst of a political crisis, where land disputes are common and perpetrated by King Mswati and his Chiefs through the grabbing of land from the people.

"Ramaphosa Is a Liar, Killer and Thief" Chirwa Continues to Accuse President

Nurses Find Birth Control Object While Delivering a Baby, It Did Not Work

Everyone is claiming an Audi (view to claim also)