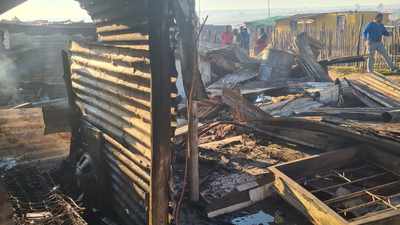 The incident that have took place in Hendrina area, in Mpumalanga where the shack was burning and sadly cost the lives of twins.

The community and the whole neighbours have described the incident of four children who are being killed by the fire in the shack, as tragedy that's will take lot of time to go away the incident happened at Marikana informal settlement in Hendrina, located in Mpumalanga province.

According to the source the case of the deaths of eight eight-year-old boys and two other 13-year-old girls, it happened yesterday morning.

A neighbor who was able speak to the media who goes by the name of Patrick Chiloane, said he heard some screaming voices sounds like they are crying.

“I woke up quickly, went out the door to see why they were crying. When I got outside I saw that the neighbour's shack was on fire, ”said Chiloane.

He told the source said he arrived at the scene and tried to put out the fire but to no avail as the flames were still high and uncontrollably.

Provincial police spokesman Brigadier Selvy Mohlala said according to their information, police were called to the scene where the shack caught fire.

“When they arrived, they found that there was a fire. Firefighters were called in. "Unfortunately the four twins were burnt to death and were found dead at the scene," said Mohlala.

He said it was not immediately clear what caused the fire but what they noticed was that there were electrical wires visible on the floor.

He said this led them to suspect that the electricity may have been connected illegally.

Mohlala said the 33-year-old mother of the deceased, originally from Mozambique, had left the children alone.

Mohlala said they found out that their mother had left them under the care of their 17-year-old brother.

"When the fire started, his brother tried to save his siblings but failed because the fire was already too big," said Mohlala.

He said the mother and brother of the 17-year-old twins were taken to a hospital in Middelburg as they were in a state of shock.

“Police have opened a death docket. Their investigation is ongoing, ”said Mohlala.