The robbers fled with an undisclosed sum of money and the security officer’s firearm, but left behind the goods they had gathered to take.

The wounded security officer, who works for Red Alert, was part of a team responding to a panic alarm received from the store.

A person who works near the store told the Dispatch he had heard a single gunshot.

“I then saw a security guard who was bleeding. Some men came out of the store and fled in a vehicle parked nearby,” the witness said.

Another person, who also works nearby, said she also heard one gunshot.

“I didn’t realise it was a robbery, but I came out of the office after seeing a security guard passing by with blood on his face.

“He was bleeding from his mouth. Immediately, an ambulance came and took him away.”

Red Alert spokesperson Brett Harvey said they had received emergency signals from a store in Devereux Avenue in Vincent on Monday.

“Our armed response team was dispatched and on arrival, with backup coming, our officer approached the scene with caution to investigate. The suspects seemed to have spotters who alerted the other suspects inside the building. 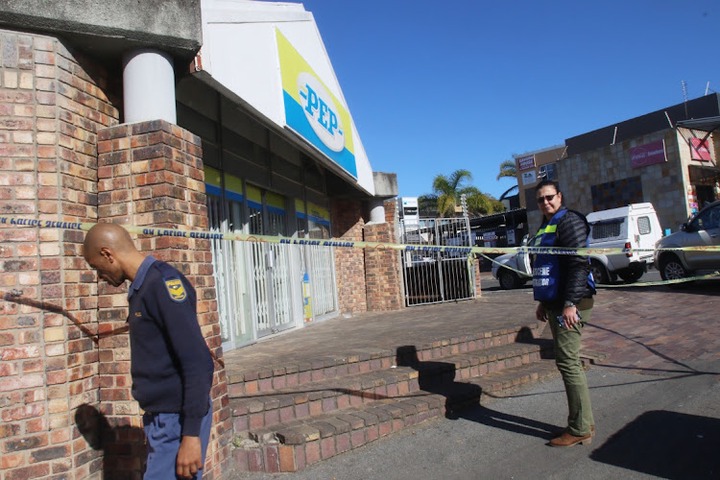 “Our officer was ambushed while coming around a corner and was unfortunately shot in the face by one of the suspects.

“Our Emergency Medical Services personnel were quickly on the scene and took him to hospital.

“He is doing well and is in high spirits, recovering. It is alleged that at least seven men were involved in the robbery and were most likely spooked by our officers’ arrival, as lots of goods in bags were left behind at the scene.

“We are working with the police to bring the perpetrators to justice,” Harvey said.

Provincial police spokesperson Brig Tembinkosi Kinana said a case of business robbery, attempted murder and theft of a firearm was being investigated.

It is believed the security guard was in the store when two robbers entered.

One held him up at gunpoint and pushed him to the back of the store to search him for a panic button.

The other approached two assistants at the counter. The panic signal was later pressed by one of store’s workers.

Kinana said while the guard and two other shop assistants were being kept at the back of the shop, a further two robbers entered and started packing cellphone boxes into a duvet cover which they took from the shop.

VIDEO: Two ladies says the Polo driver slept with them without paying after the accident in Pretoria

Two women and a man bust with stolen copper cables

WATCH: A Polo Driver Allegedly Slept With 2 Girls & Tried to Run Away With Them But This Happened

A man dies in a roaring fire in his home|| Look what happened. See pictures