The cops and the five offenders who were captured inside one of Johannesburg largest mall. 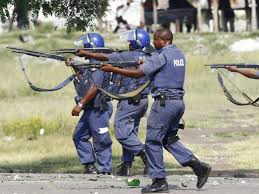 Were involved in a furious fight for survival. In other to shoutdown and grab 3 million dollars costly jewellery from one of the jewellery shops in the mall.

The five criminals searched into the mall equipped with heavy fire arms.

The police made a quick response by wasting no time from taking bribes.

As soon as the police arrived at the suspected crime scene.

The heavily armed crew didn't hasitate to open fire and release the first gun shot arming at the up coming police van.

Police retaliated by opening firearm within a blink of an eye.

Five Suspects were killed by the police on a car chase and 4 was killed inside the mall. 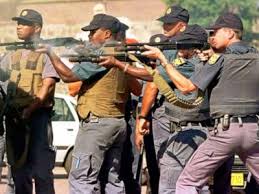 One police officer was aslo killed by the suspects during the gun fight.

With the aid of metro police 3 more suspects were arrested by the SAPS.

Due to the fact that the police and the suspects shot rounds at each other, its still not clear who shot the dead police officer.

The Johannesburg community is still amazed and left shocked by the behavior they witnessed.

Shops inside the mall and shops near by the mall were closed to help the SAPS with the investigation.

The mall owner whom asked not to be mentioned by name.

"The eight men came into the mall with heavily armed guns asked everyone to corporate we were instructed not to move but by the grace of god one security guard managed to make the 10111 call " said the mall owner whose identity remains unknown.

"Our business is located in the most busy corner of Johannesburg. The traffic lights and stop signs make it easy for us to be a target since no one can easly notice because of the on going rush" added the mall owner.

3 man whom were arrested are taken to custody and are under police supervision.