The police lady that was killed is Thembani Mbali Jele, she is the only one that has been named in this love triangle shooting. It is sad but true, the shooting happened right around 5 pm in Diepkloof Soweto and the residents were shocked.

A forex Trader was killed yesterday in Diepkloof Soweto the thing is he was not killed alone they killed a police officer woman who was with him in a yellow Mustang and that's the sad truth.

It was believed that the policewoman was a taxi owners girlfriend and a Mustang driver just came and soup her away, with one look this shows that in South Africa not only take the owners to have money there is a new generation of millionaires tell us or we are that people are afraid of them.

Young forex traders should move differently, when you are too loud you'll most likely be killed so you have to always try not to go to the hood and flex as the same thing happened to Willard but he was not killed they just beat him up. 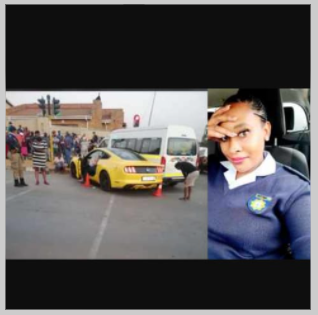 They said the police found empty cartridges where the guy that killed the forex Trader was because it is believed that he also killed himself after shooting down the couple in Diepkloof at the red light. Jealousy and envy are what killed the forex Trader who was in the Mustang but the lady did not deserve to die, this is just way out of order for a policewoman to be killed like that.

Killing two people was just having a good time if somebody doesn't like you anymore, just move on let it go because you knew how he found her in the first place is how you lose her, now he wants to act surprised when she starts leaving with younger boys bigger money and bigger prospects.