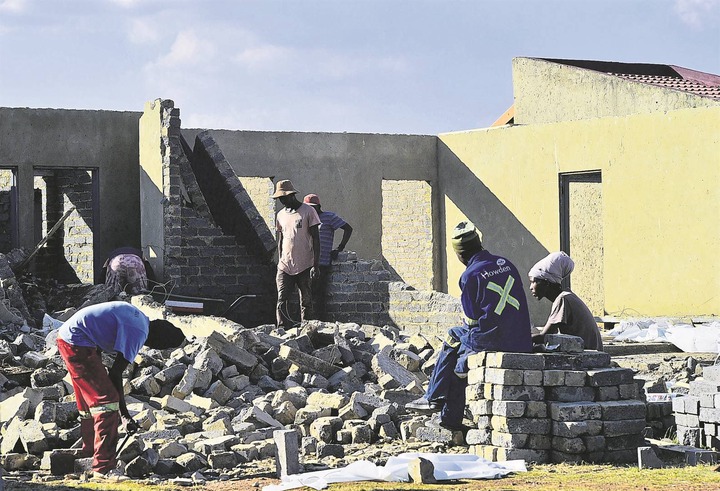 Residents were left distraught when three newly-built homes were bulldozed in Evaton West near Sebokeng, Gauteng.

FAMILIES have been left homeless after three of seven houses they were living in were destroyed on Thursday.

They homes were being constructed on private property in Evaton West near Sebokeng, Gauteng.

The destruction occurred after a protracted legal struggle between the bank that owns the site and Wildebeesfontein Properties and Projects, who sold the stands to the community. They claimed to have been working with the Department of Human Settlements and/or Rural Development and Land Reform.

Eunice Lesemela claimed she was horrified when her seven-roomed house was destroyed.

A guy whose home was destroyed said: “I’m not sure whether to blame the developer or human settlements. I wish I had more knowledge about this place before I acquired it.”

Wildebeesfontein Properties chairman Andrew Molefe told Daily Sun destroying the homes was unlawful and that they had taken the case to the court.

He stated a draft order that was given on 22 July 2020 was utilized to remove persons.

“We’re amazed that they utilized the same draft order to destroy community housing.

“This case is with the courts and we are waiting for the corporation to serve us with a notice of motion,” added Andrew.

National Human Settlements Agency spokesman Mandulo Maphumulo said the department withdrew itself from a relationship with Wildebeesfontein Properties and Projects. “The Gauteng Department of Human Settlements and the Housing Development Agency both acknowledge there is no arrangement or cooperation as reported. The property is unlawfully and illegally occupied, and in connection with the steps previously taken, law enforcement authorities will be addressed to investigate the fraudulent use of the emblems of the department as well as misrepresentation and corruption related with such acts,” said Maphumulo. Gauteng human settlements MEC Lebogang Maile said the destruction occurred on private property which doesn’t involve government.