By User_Thando (self media writer) | 1 month ago 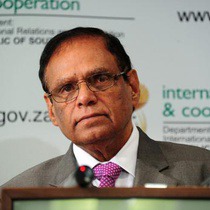 He was Born 1 July 1937. And he later joined the liberation movement as a youth activist in 1952 at the age of 15 and he then participated in the Congress of the People Campaign.

The camps later was adopted to the Freedom Charter in 1955. As an ex-combatant of Umkhonto we Sizwe, he was arrested and charged for Sabotage 1961. He got Sentenced to 15 years imprisonment at Robben Island alongside Nelson Mandela he was released in 1979 at the age of 34.

He went to exile on instruction of the political party ANC in 1980.

Ebrahim was the parliamentary counselor to (Deputy President) for a portion of the 5th Parliament. He lived his life and may his soul rest in peace

Content created and supplied by: User_Thando (via Opera News )