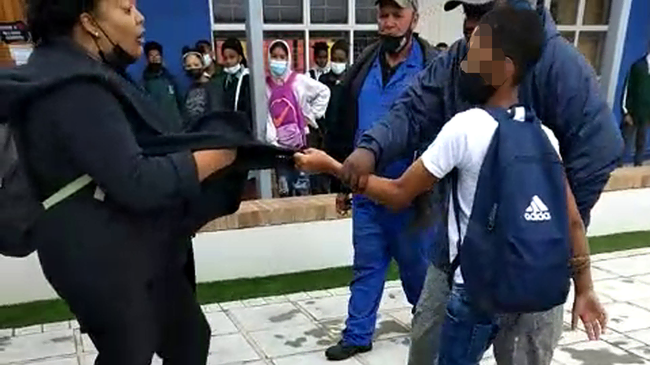 CAPE TOWN – A thirteen-year-old boy was detained and released on a warning after being recorded on film beating an assistant teacher with his clenched fists on the body and head last week.

The video shows a Grade 6 student from Harmony Primary School in Steenberg hitting the teacher after she seized a ball from another student.

According to police spokesperson Captain Frederick Van Wyk, witnesses attempted to pull the student away from the teacher when he became enraged and attacked her.

He stated that the youngster was apprehended on December 3 and released into the custody of his parents with a warning to appear in Wynberg Magistrate's Court on Wednesday.

"Steenberg SAPS took the learner from school, and the learner's mother was informed, and he was placed in the care of his mother." "The matter will be pursued further, and video evidence of the event was also taken," he stated.

Arlene Petersen, a 32-year-old educator assistant, told the Daily Voice that she confiscated the ball because they were playing with it while school was in session.

She said it was the second time the youngster had abused her, claiming he had "almost struck her with a brick" the week before.

"School was in session, and they were playing with a ball on the quad," the Daily Voice said. "I had to remove it since I had ordered them twice to line up in front of their classes."

"He rushed at me and hit me repeatedly behind my back and in the head."

"Following that, the principal instructed him to return to his class to complete his test, and I went to the staff room until the SAPS came."

"The school is initiating disciplinary measures against the pupil," said the Western Cape Education Department (WCED). He has also been sent for intervention to our specialized learner and educator support team."