On Thursday, August 18th, a minibus cab driver in the City of Cape Town reportedly lost control of his vehicle, which landed on the center median of Nelson Mandela Boulevard, not far from Melbourne Road. 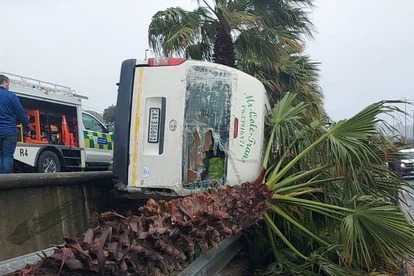 ACCIDENT IN A CAPE TOWN TAXI

A spokeswoman for the City of Cape Town's Traffic Services, Kevin Jacobs, has confirmed that a cab flipped, and he has also reported that the right incoming lane of Nelson Mandela Boulevard has been closed.

According to Jacobs, 23 people were hurt in the collision, and three of them are in critical condition. At 13:15 he announced, "There are no deaths at this stage." The emergency response team from Cape Town, South Africa's capital city, is present.

Clearly, this is a work in progress. South Africa has contacted the Western Cape EMS for comment, which will be included whenever available.

On Thursday, June 30th, for reasons that are not linked, a MyCiti bus was involved in an accident on Nelson Mandela Boulevard. On its way to Cape Town, it jumped the curb and crashed against another car. There were no fatalities, and three people were hurt and brought to the hospital.

MayCo Member for Urban Mobility for the City of Cape Town, Rob Quintas, expressed gratitude that no fatalities had been recorded and added that more information was needed about the MyCiTi passenger who was injured last night and the driver of the vehicle that became trapped under the bus.