The leaders of many African countries are to blame for the ongoing suffering of their people. Many of these leaders don't care about the people they lead. They have an insatiable desire for power and will do anything to maintain their position and obtain their goals. Even in South Africa, where most of the jobs are taken by foreigners who fled their country because of the suffering they had to endure, poor Africans do not have adequate housing or employment opportunities. But in the process, they are making South Africans the victims of their government's incompetence.

According to a recent report by the World Bank, other countries appear to be doing much better than the United States when it comes to providing housing for their citizens. The Rwandan government has decided to introduce a new house model to ordinary villages in order to transform them into extraordinary ones. It is referred to as a model village. According to rumors, each family in the area will receive a fully equipped home as well as a dairy cow, chickens, and irrigated land. There are also rumors that these villages have health clinics and schools.

Though this has not convinced everyone, there are those who disagree. If you're going to change villages into cities, some people think it's not a good idea. To put it another way, it's called a village because there isn't enough room for everyone to spread out. There are no yards because the houses are so close together. In the village, this is not a good experience. People are left with mixed emotions as a result of these houses, and you can tell that they are finding it difficult to accept the possibility that Rwanda is doing something beneficial for its citizens. 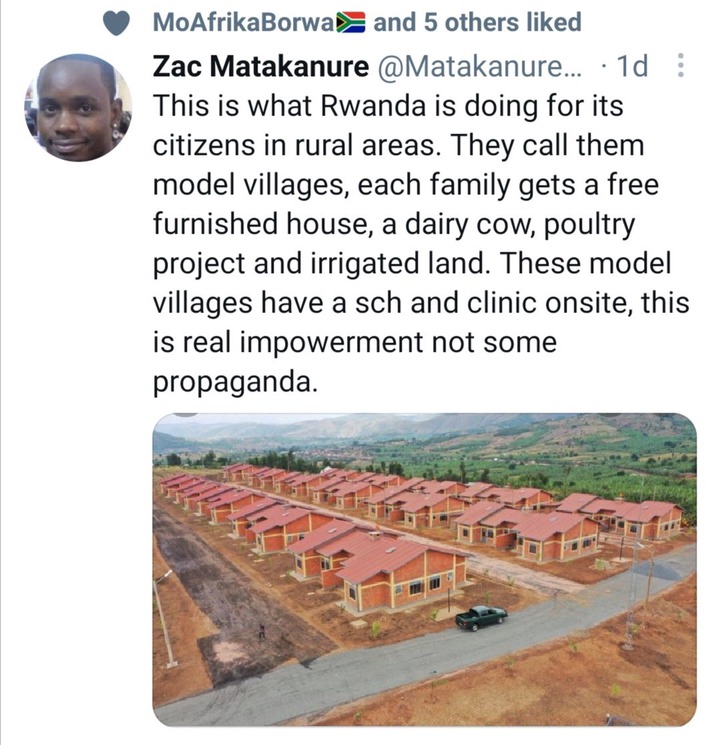 Some Zimbabweans argue that the fact that people are crammed close together negates the notion that this is progress. It's a common belief that many African countries are attempting to do the same, but half of Zimbabweans are fighting for land and getting RDP houses meant for South Africans in South Africa.

While this may be true of South Africa, the government here is more focused on donating millions of Rands to Cuba and erecting some monument flags worth approximately 22 million Rands. Maybe the South African government can learn a thing or two and do something for the people and not always think about corruption, because even the houses that they build are of poor quality.