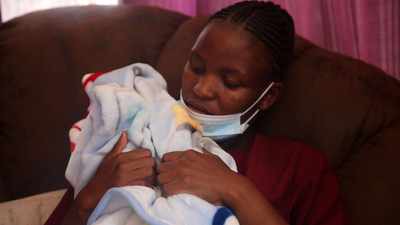 Elizabeth Zama (31), Sibonelo's mother, who lives in the township of Lamontville, Durban, they stole her baby for three and a half weeks on November 17.

SHe said life is too difficult, she can't eat and she did not know if her baby is still alive and the doctors who visits her and the people in the community encouraged her not to let it get too bad even though it is difficult since he was a baby with epilepsy.

SHe said she gave birth on November 16, and as she walked out of the gate of King Edward VIII Hospital she met a woman who eventually abducted Sibonelo.

Ms Zama said the woman, who was in her late 50's, looked so faithful and compassionate that she confided in her that she was poor and no longer had parents.

The kidnapper said she had tricked her into not worrying and would take her to the city of Durban to buy baby clothes because she used to help people in need (like Ms Zama).

She said that when they were in the city center, she would take her out of the shops, buy the child R200 clothes, and go to the grocery store to buy what she needed for the house for R300.

“It was during this time that I went to buy what I needed for the house, when I asked the woman to hold the baby for me, and she suddenly disappeared in my face . This happened when I came back she was missing, ”explained Ms Zama.

SHe said they did not see the woman who fled with her baby and said she had been crying, shaking her but did not know where she ended up.

KwaZulu-Natal police spokesman Captain Nqobile Gwala said a child had not yet been found but police were continuing their investigation into a kidnapping case opened in Durban Central.

Unexpected| Over 100 SAPS Police officers have been charged for domestic abuse. See more.

What police found this man having 230kg of is surprising.