WATCH: Woman Gets Swept Away By Flood In Western Cape And This Happens To Her 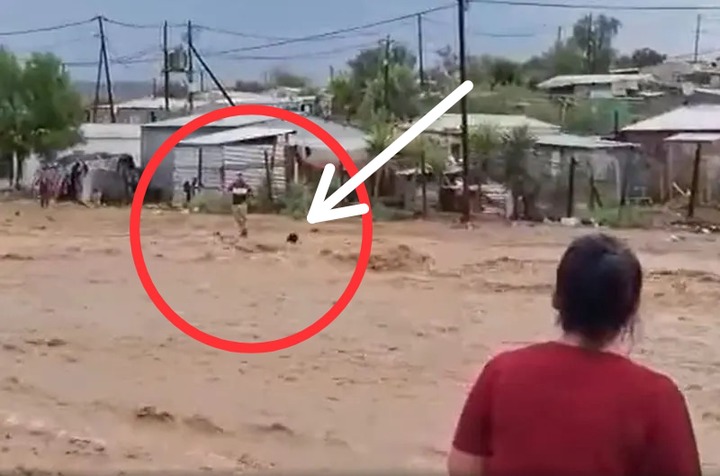 A new video depicts the magnitude of the downpour, with a woman being washed off her feet. Joe Booysen posted a video on Facebook showing a woman in the stream before a man tries to get her out. More rain is predicted throughout the week in the region, according to Cape Town etc, after the South African Weather Service (SAWS) issued a weather warning for certain regions of the Western Cape. Watch video at the end of the article.

Since the Oudstrhoon municipality issued severe thunderstorm warnings, numerous homes have been demolished and people have been relocated as high winds, torrential rain, and extensive floods have continued to cause mayhem. According to the news, the Oudtshoorn municipality issued a warning on Monday, December 6, about rising water levels in a river that comes from the Cango Caves. The increasing flood was classified as "very hazardous" by the municipality. "We encourage citizens not to cross any of the town's low water bridges since debris may be in the water," the Oudtshoorn municipality stated in a statement. 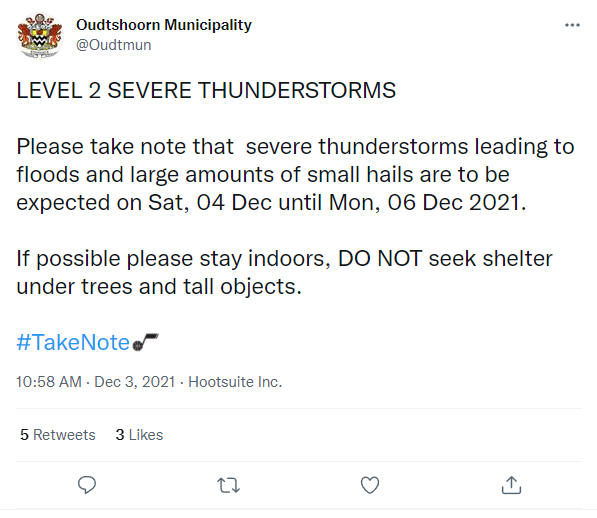 Even if more rain fell in the catchment region after the measurement was made, a measurement conducted on 6 December in Oudsthoorn revealed 38mm rainfall. The actual rainfall amount was predicted to be between 40mm and 50mm. Tammy Moult, tourism manager at Cango Wildlife Ranch, said the facility was cleaning up following heavy rains a week ago. She stated that because they were located beside the river, increasing flood levels remained a concern. "The water is coming down hard, but we have approximately a three-hour notice from the Cango Caves before it reaches us. All of the animals are secure and dry."

The Western Cape's SABC also stated that disaster management chief Adel Supra-Vertue said that they are still on high alert as rain continues to pour in the area. "We got a cloud burst, which resulted in some flooding." Some roofs in town and outside of town were damaged by wind, as were trees that crashed onto buildings. We have some damage in Meiringspoort as well, but our main worry is our area in Bonglethu, which was severely damaged by the wind and rain," Supra-Vertue added. 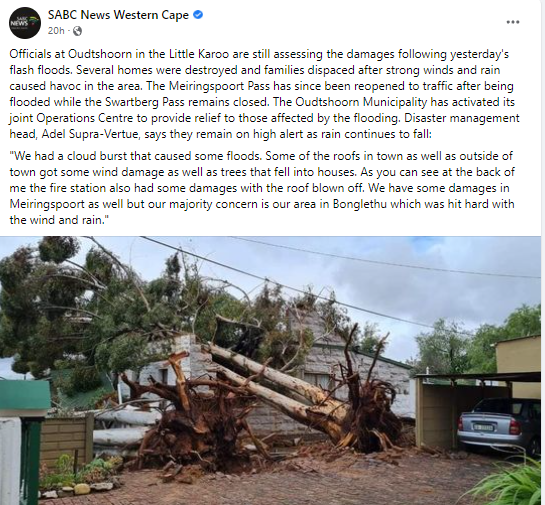 OPINION| Three reasons why Lindiwe Sisulu is not good for presidency

RIP: ANC leader gets shot dead and many are left in shock