By DETERMINED_FOR_LIFE (self media writer) | 3 months ago 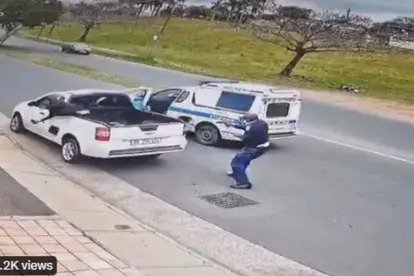 Three suspects have been caught on video taking shots at police in Sherwood, Durban on Monday 4 October. The shootout happened after police impeded their Chevrolet white bakkie in the street.

The video, which was shared by South African wrongdoing dissident Yusuf Abramjee, starts with a white Chevrolet bakkie getting captured by a police van in the street.

One cop got out of his van with a gun pointing at the white bakkie's inhabitants as it halted.

Rather than getting out of the white bakkie with their hands up, the suspects unexpectedly started to take shots at the police with a hail of projectiles. The cop terminated back while additionally backing away from the terminating line to seek shelter behind the bakkie.

A third suspect, who originally attempted to move over from the traveler's seat to jump in the driver's seat, neglected to get the bakkie moving. He then, at that point, chosen to venture out, discharge more shots at the police prior to running up the street to leave the white bakkie behind.