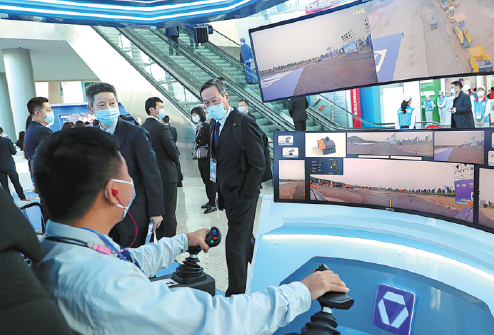 Representatives from China and abroad have expressed great interest in the nation's establishment of a global innovation and knowledge center for sustainable transportation, saying that it will be an important platform serving China's international communication in the sector.

On Thursday, as he delivered a speech via video link at the opening ceremony of the Second United Nations Global Sustainable Transport Conference, President Xi Jinping announced that China will set up a Global Innovation and Knowledge Center for Sustainable Transport, as a contribution to global transportation development.

"President Xi's announcement on setting up the center demonstrates that China pays a great deal of attention to sustainable transportation. The center will serve as an important platform for international communication and cooperation," said Shi Baolin, head of the China Academy of Transportation Science, adding that it will be a milestone in China's promotion of sustainable development in the transportation sector.

China has learned from the experiences of other countries in building its transportation network, and it has developed technologies based on independent innovation. The establishment of the center shows China's willingness to share its experiences and technologies with other countries in order to promote the sustainable development of global transportation, he added.

It also shows that China will adhere to a spirit of openness and sharing in order to promote global sustainable development, he said.

Thomas Ostrup Moller, Denmark's ambassador to China, said President Xi made some very good points during the speech at the opening ceremony of the conference.

"He made a convincing case for an efficient transportation sector as a prerequisite for development," Moller said. He also noted that Xi called for developing a low-carbon transport sector and encouraged the whole world to utilize advanced technology in future development.

Regarding China's announcement to establish a global innovation and knowledge center for sustainable transport, he said he will follow it carefully. Moller hailed China's development in the transportation sector.

"What we have seen is a massive expansion of the transportation sector in China in the past 25 years. It has been very important because an efficient transportation system is a prerequisite for social and economic development," he said.

He also noted that China is increasingly relying on new energy vehicles. "It is the first step toward sustainable transportation infrastructure in China," he said.

Liu Daizong, China director of the Ross Center for Sustainable Cities at the World Resources Institute, expressed great interest in the establishment of the global innovation and knowledge center.

"It shows that China values innovation and technology-driven international cooperation, including absorbing experiences and sharing valuable wisdom with other countries," he said.

"The development of sustainable transportation requires cooperation among different sectors, such as transportation, environmental protection and technology. It is not just a task for the transportation sector," he said, adding that challenges remain in terms of promoting interdepartmental collaboration.

The conference, which opened on Thursday and closes on Saturday, is looking at how sustainable transportation can help achieve the objectives of the 2030 Agenda for Sustainable Development and the Paris Agreement on climate change.

Representatives from China and abroad are sharing their wisdom and experience at the conference both online and offline.

Motion of no confidence against President Cyril Ramaphosa submitted

South African Restaurant Association is not ready for tighter lockdown