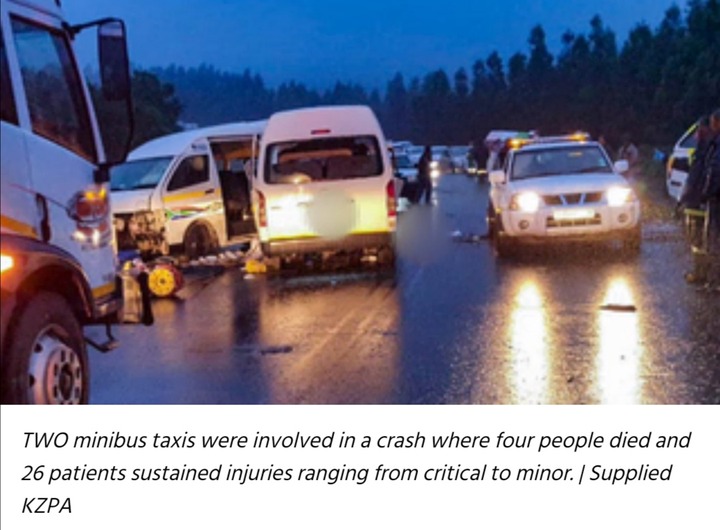 On Saturday, at least four people were killed, a few were critically injured, and many more were injured in road crashes on KwaZulu-Natal roads.

Following reports of a collision, KwaZulu Private Ambulance (KZPA) responded to a crash on the R66 in the Eshowe area of northern KZN on Saturday evening.

Initially, it was thought that the crash had killed five people and left eight others in critical condition.When they arrived, two minibus taxis had been involved in a crash, according to KZPA.

"Paramedics arrived on the scene quickly and discovered 26 patients with injuries ranging from critical to minor," according to KZPA.

The patients were treated on the scene before being taken to the hospital for further treatment, according to the service.

"Unfortunately, four occupants died as a result of their injuries before emergency services arrived," KZPA said.

The service also stated that authentication was required.By the time this article was published, the police had not responded.

Meanwhile, on Saturday night, a man was left fighting for his life after crashing his car into a tree on Becton Drive in Malvern, west of Durban. 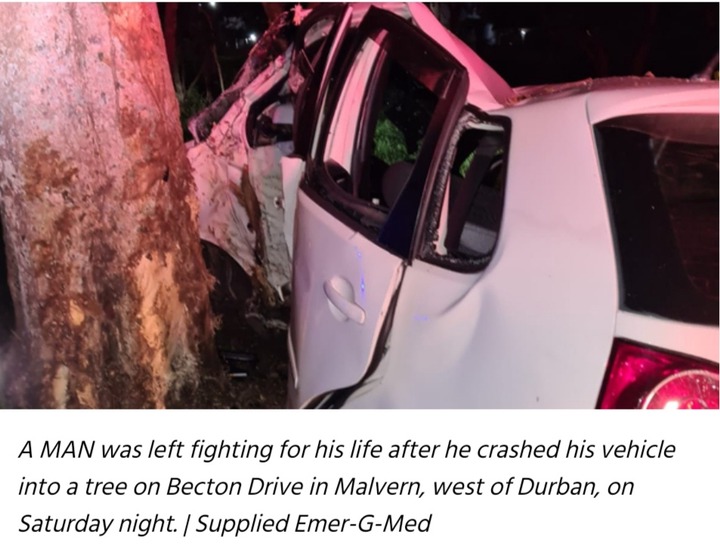 According to Emer-G-Med spokesperson Kyle van Reenen, paramedics arrived at the scene to find a light motor vehicle had collided with a tree at high impact.

According to Van Reenen, paramedics discovered a 40-year-old man in critical condition seated in the front seat.

"Advanced life support intervention was required to stabilize him before he was put on a mechanical ventilator to help him breathe and transported quickly by ambulance to a nearby hospital for further care," Van Reenen said.

Two other passengers, he said, had minor to moderate injuries. Before being taken to the hospital, they were treated on the scene.

Van Reenen went on to say that the cause of the incident and the events leading up to it were unknown, but that they would be investigated by the police.

IPSS Medical Rescue and the IPSS Search and Rescue Unit were dispatched to the R102 in Umhlali, north of Durban, earlier in the evening after reports of a head-on collision. 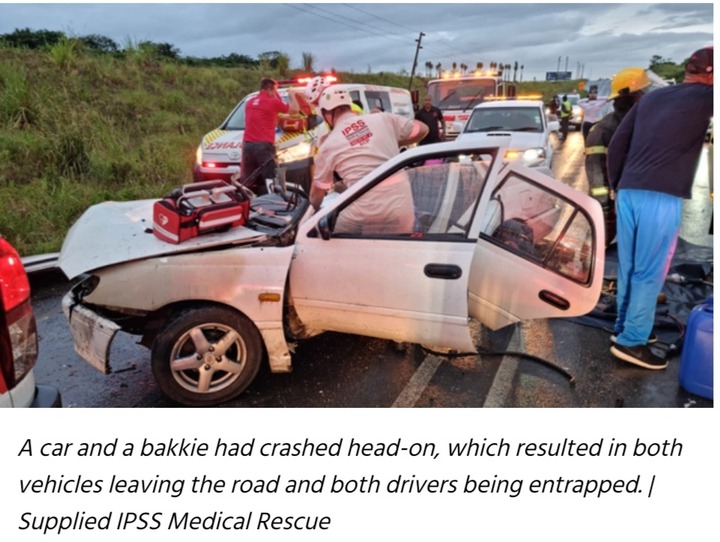 When paramedics arrived, they discovered that a car and a bakkie had collided head-on, causing both vehicles to leave the road and both drivers to become entrapped.

"Advanced life support paramedics and KDM (KwaDukuza Municipality) fire and rescue worked together to free the entrapped persons, both of whom were critically injured," Herbst said.

IPSS Medical Rescue transported the patients to the hospital after they were extricated, he said.