After their vehicles were set on fire, taxi drivers filed charges of malicious damage to property. 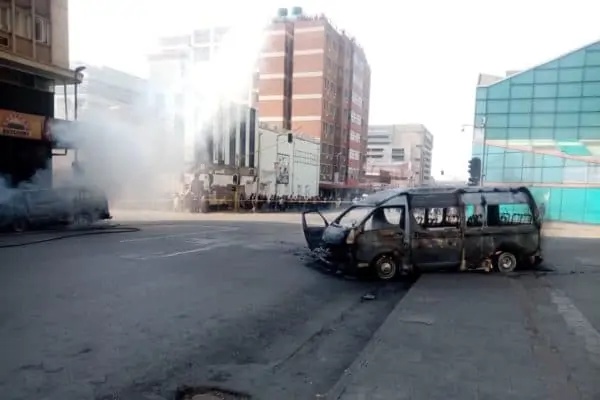 Four taxis were torched and six others damaged in the Johannesburg CBD on Saturday. Photo: Twitter/JMPD

One of the taxi organizations involved in the violence in the Johannesburg CBD on Saturday, which resulted in four cabs being set on fire and six others being damaged, blames the government for the unrest.

Hamilton Miya of the Witwatersrand Taxi Association (WATA) told eNCA on Sunday morning that government authorities should not be registering routes.

The rivalry between WATA and the Nancefield Dube West Association was to blame for the violence on Saturday (Nanduwe).

On Saturday, two Nanduwe cabs were set on fire in Soweto, according to him.

Miya accused Jacob Mamabolo, the Gauteng Transport MEC, of having a "soft spot" for Nanduwe. “This is the first time I've seen the MEC so enraged. Our cabs have been vandalized numerous times, and when we report it to the MEC, he is never as enraged as he is now," Miya explained.

"Without government, taxi drivers know how to solve their own difficulties," Miya added.

Some taxi drivers, according to the police, have filed accusations of malicious property damage.

WATA has been shut down since Saturday am, according to Miya, because it worries for the safety of its drivers and passengers.

On Sunday, Mamabolo will encounter WATA and Nanduwe.

In Soweto, two taxis were also set ablaze. Rivalry over routes is thought to have caused the fights.

"We deplore the violence between WATA and Nanduwe because it jeopardizes the work that our department and the taxi sector have been undertaking to stabilize the province." "We urge law enforcement to act quickly to apprehend those responsible for the violence," Mamabolo stated.

"We demand that the taxi sector cease from using violence." Their leadership should accept responsibility for this and put an end to it."