Durban- South Africans must brace themselves for darkness for the entire week as it has been confirmed.

In just a week after South Africans went to vote but the situation has gone from bad to worse for the country. There is no service delivery at all or signs of improvement in service delivery. Instead, we are faced with crisis after crisis.

While people were hoping that the situation with Eskom and loadshedding will improve, atleast this week, they have rather faced with some more obstacles then they anticipated. More bad news which will continue for the whole week and perhaps escalate to the following week. 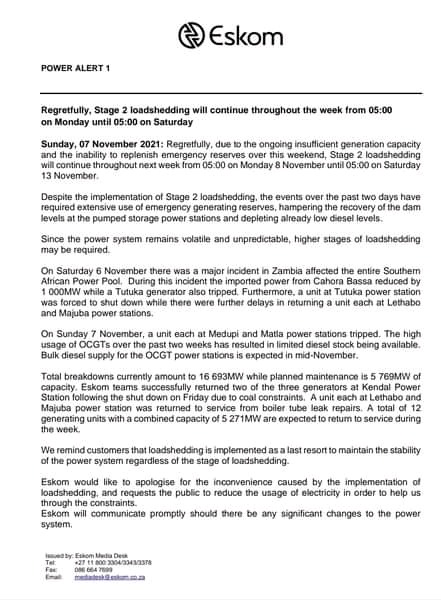 On Sunday, the power utility, Eskom, released a statement advising the nation that stage 2 load shedding will continue throughout the week from 5 am on Monday 8 November until 5 am on Saturday 13 November.

The utility also warnef that it could not rule out higher stages of load shedding should the situation worsen.

"Regretfully, due to the ongoing insufficient generation capacity and the inability to replenish emergency reserves over this weekend, Stage 2 load shedding will continue throughout next week from 05:00 on Monday 8 November until 05:00 on Saturday 13 November," spokesperson Sikonathi Mantshantsha said.

"Since the power system remains volatile and unpredictable, higher stages of load shedding may be required."

He said a "major incident" in Zambia on Saturday had affected the entire Southern African power pool. Imported power from Cahora Bassa reduced by 1 000 MW, while a Tutuka generator also tripped.

Furthermore, a unit at Tutuka power station was forced to shut down while there were further delays in returning a unit each at Lethabo and Majuba power stations.

On Sunday, 7 November, a unit each at Medupi and Matla power stations tripped.

Total breakdowns currently amount to 16 693 MW while planned maintenance is 16 769 MW of capacity.

Mzansi Is Concerned With Andiswa Selepe New Shape, See What They Noticed About Her (Photos)

What does DA have to say about sexual allegation of Fritz