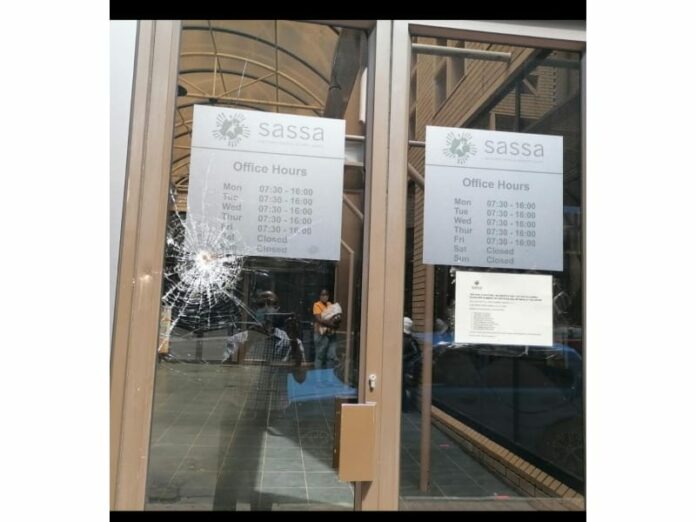 Windows were slightly broken at the Sassa offices in Bloemfontein on Friday, after a man got into an altercation when his R350 unemployment benefit application was rejected.

Eyewitness Itumeleng Moroe said he saw a 35-year-old man shouting for his money, before picking up a brick and throwing glass windows and doors.

"An angry man picked up bricks and smashed a glass door on the doorstep of Sassa's office and insulted the staff," Itumeleng told Scrollla.Africa.

“There were women who were carrying babies on their backs, old men and old women. He said the Sassas were playing games with him since he came more than five times. ”

People who had been waiting outside the line had to flee the scene, as pieces of glass were scattered all over the place. Police were called in to arrest the suspect.

A woman who identified herself as Anna of Freedom Square, Mangaung, said she feared her four-year-old child might be injured.

“I was there to collect my child support grant. Holding my baby's hand I ran away. I thought the man could end up kidnapping people, ”said Anna.

“This was not the first time the man had visited the SASSA office in the Free State. The man's actions prompted people who had been to a medical examination, mothers with young children who had been waiting for a child support grant, and office officials to flee in search of a place to hide, ”said Sechaba.

The Sassas are investigating the costs of the damage.

"The suspect will appear in the Bloemfontein Magistrate's Court on January 17," a police spokesman said.