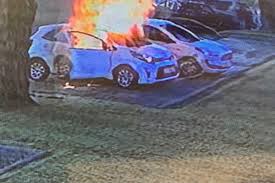 The man who murdered a Benoni mom by setting her alight, has died. Police spokesperson said: "I can confirm that the suspect passed away in hospital."

In September a man set a woman, believed to be his girlfriend, alight outside a Benoni crèche. She was rushed to hospital where she later died due to her serious injuries.

The 40 year old man who committed this horrible crime was also taken to hospital where he remained for two months following the incident.

The lady was just dropped off her four year old daughter when the man approached her car and smashed the drivers side window. Video footage shows the man returning to his vehicle where he retrieves something before going back to the victim's car. He is then seen motioning with the item in his hand towards the cat. The woman makes an attempt to stop him but a few moments later, the car bursts into flames and the lady who is standing near the car also catches alight.

The suspect was also injured and was taken to hospital in a serious condition where he was under police guard. He passed away at the hospital on 22 November.

Watch: What South Africans did to Foreigners yesterday, Painful

On duty Metro policeman gunned down in Tshepisong Roodepoort

Johannesburg: Zimbabweans being chased down by South Africans in Turffontein