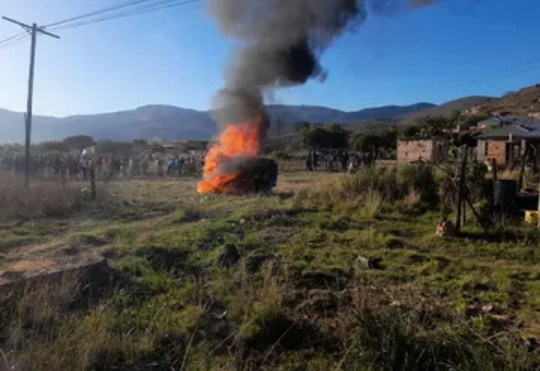 It is reported that two men were met with the arm of mob justice when they tried to kidnapp a 23 year old woman on Wednesday. They were stoned and burnt to death. This took place in Limpopo.

The police have given a statement to the media that these men were chased by the angry community members as they tried to get away using a car. They had robbed the woman of her belongings and her cellphone then allegedly attempted to kidnapp her as well.

Upon their attempt to getaway, they crashed their car and the mob caught up with them. Two of them were brutally killed after being stoned and torched by the angry mob , the third one got lucky as the police arrived to save him. He was arrested. Their getaway car was set alight after this event unfolded.

The police described how the police station was surrounded by the community members who were demanding that the police should release the third suspect. The crowd control unit(POP) was then dispatched to contain the situation.

The arrested suspect is to appear in court soon to face charges of robbery, and attempted kidnapping. An investigation has been launched into the two killings of suspects that took place during the mob justice incident.

The police continue to urge the public to refrain from taking the law into their own hands. It has been assured that the people involved in these two murders will also be dealt with mercilessly and the perpetrators will be brought to justice.

Content created and supplied by: Neo66 (via Opera News )