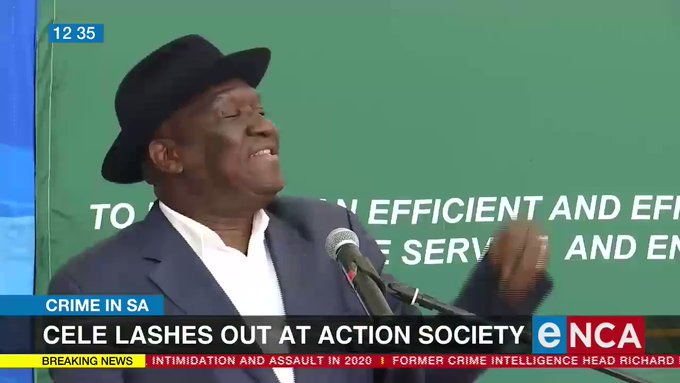 Bheki Cele attended a community of the people of Nyanga and Gugulethu who are crying about violent murders. It didn't end well because Action Society representative Ian Cameron told him what is wrong with him.

Ian Cameron told Bheki Cele that Nosiviwe James was murdered on the 8th of May in Khayelitsha. She was at stabbed, 100 meters where other 6 people were shot 5 minutes earlier.

"No one followed that case, but he did. because her sister wanted us to help. Do you know where we found the suspect in Eastern Cape. We brought him back and he is now detained in Khayelitsha. We did that because. We care for the community. We patrol for them. We give them training. I don't see you doing the same, sir. I am tired of excuses. I am tired of you making it a political thing. Non of these people tonight when they see their neighbours slaughters on the street worry about your nonsense comments: the Constitution and about evolution, they worry about their survival."

He challenged Bheki Cele, and said he want to graciously invite him to come and patrol workout a body guard, without a grand car in normal clothes with this Community tonight.

Being told what to do by a white man, just put off Bheki Cele and he couldn't hold back himself, his deep seated grudges with white people just came out. He shouted at the young man telling him to shut up and final said he must get out. And he was march out of the community meeting.