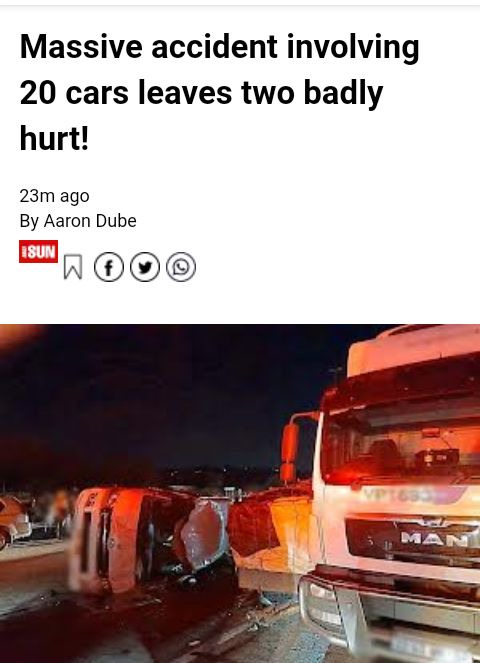 On Saturday night, at around 7 o'clock, two people were rushed to the hospital following a collision involving 14 vehicles on the N1 north close to the Garsfontein offramp in Tshwane.

One person needed to be evacuated to a hospital with significant injuries, while another with minor to moderate injuries was also taken there.

Two individuals were hurt in numerous car pileup incidents on the N1 north near the Garsfontein offramp in Tshwane, according to deputy chief and spokesman Charles Mabaso for Tshwane Emergency Services.

According to Mabaso, when the accident was first reported, at least 20 cars, including a bus, a truck, and a taxi, were involved, with no confirmed injuries.

Emergency services were able to conduct a more thorough investigation with the assistance of law enforcement officials and Bakwena Road Patrollers and discovered that 13 vehicles, including a truck, bus, cab, and two trailers, were involved in the collision.

Only two patients were taken to medical facilities, one of whom was airlifted there with critical injuries and the other of whom was taken there with minor to moderate injuries. Fortunately, no fatalities were reported at the scene. 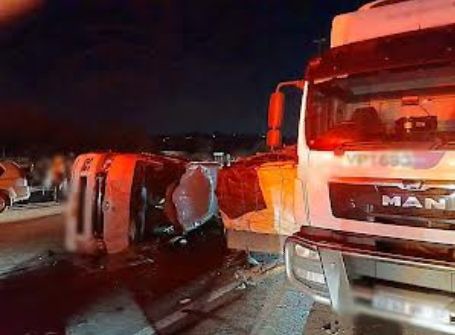 According to Mabaso, the road remained closed for the majority of the night before being fully cleared at around 4 am on Sunday.

They also responded to the collision, according to a statement from Emer-G-Med.

The statement stated that many emergency response organizations, including Emer-G-Med paramedics, had responded to the site of a multi-vehicle collision on the N1 near Garsfontein in the Pretoria region at around 7 o'clock on Saturday. According to reports from the site, up to 70 people may have been hurt when 12 small cars, a truck, and a bus crashed. An additional triage area was set up on the scene by incident command officers after an additional inspection revealed one patient to be in critical condition.

If You See These Holes In Any Lady's Waist, Here Is What It Means

Sbahle Mpisane slams trolls telling her to amputate her leg

Vitamin B12, The sign of low levels to spot in your feet when they're under a blanket