As night time approaches, many will be in a rush to get home and rest as they will have had a long day in which you are made to face so many things.

On the 24th of January 2022, motorists when they thought that they are rounding off their day were made to go through a torrid time.

According to a report which was published by Crime Air Network, a motor vehicle accident is said to have occurred on the N3 which resulted in traffic jamming. Long queues of traffic were visible and red tail lights of vehicles could be seen from several miles away. 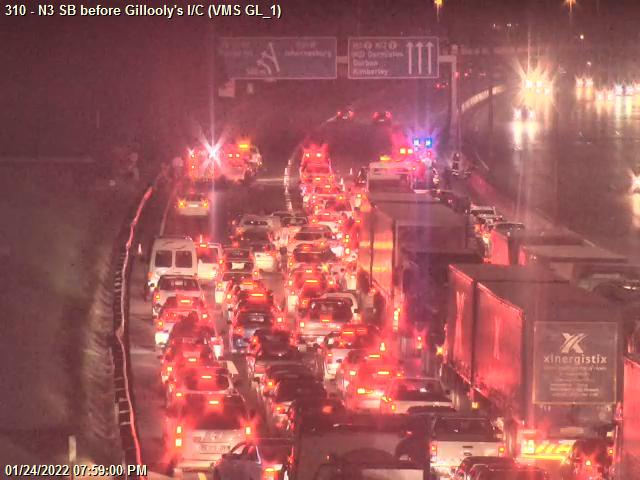 Calls were made to emergency service providers by motorists just before 20:00 hours. At least three vehicles had been involved in a nasty collision.

Within a few minutes, service providers who include law enforcement agents and paramedics were on the scene that was on the N3 South at the Giloolys Interchange. Some lanes of this road were being obstructed and traffic was being denied access.

The service providers got on to their business as the paramedics began assessing the patients who had been involved in the accident. Several teams of ambulance services were in attendance and they were transporting patients to hospitals once they had been stabilised. Local authorities were also active on the scene carrying out investigations and assisting in clearing the scene.

An official report is set to be released which will shed more light on what led up to this accident. The number of fatalities and casualties who came out from this accident is not yet known as the story is still developing. At least three lanes of this road had to be closed down as they had been obstructed by the vehicles which had crashed.

Traffic advisory messages are being sent out to motorists to make use of alternative routes if they do not wish to encounter any inconveniences.

Just In: Fikile Mbalula breaks silence. He has released an official statement. See all here

It's Confirmed Chiefs Is Set To Make A Lot Of Changes