Blessing Mba, a 27-year-old mother of two, was allegedly brutalized by certain police officers on Tuesday, May 31, 2022, at the direction of Ige Adekunle, Divisional Police Officer of the Adeeke Police Station, Iwo, Osun State. 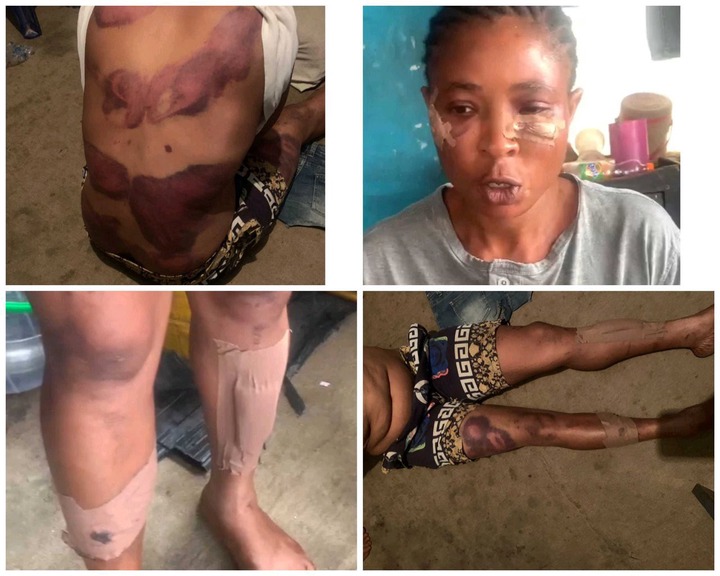 According to her account to DAILY POST, the incident took place when she went in search of her 15-year-old son Friday, who had not come home and was discovered to have been arrested by the police.

She claims that because her home is close to the station, the police officers there are familiar with her. She explained that Friday hadn't been home since he left on Monday, May 30, at 1 a.m. on Tuesday.

"I didn't bother to answer the phone I received from a station officer. I hurried to the police after coming to the conclusion that perhaps they had my son in detention.

The mother of two told DAILY POST, "I had been hearing the torture infiltrating and weeping of some of the persons arrested in the middle of the night on that same day in the police station before the call came in.

A police officer known only as "pápá" attacked Blessing while she was at the station and said that she had brought "sacrifice" with her.

"When I told the policeman at the entrance about my son, he recognized me and opened the gate for me. I was instructed to look him up at the counter. I began to be harassed by a different officer known as "pápá." He shoved me into the tPO and claimed that I had come to the station tllo drop off a sacrifice.

Blessing claimed the officers threatened to kill her while she begged for her life until she passed out, saying "We will kill you, shoot you and nobody will ask of you."

I awoke after being doused with water.

She continued by saying that she was treated at the hospital at 8 am. She added that some of her body, including her leg, had stitches.

Blessing disclosed to DAILY POST that the DPO, Adekunle, paid her N2,000 as she left the hospital and another N2,000 when she was checked in at her home in the late afternoon.

Make an effort to hide

Blessing reported Adekunle to the Police Area Command in Iwo on June 2nd. She claimed that while she was waiting for the commander, a few officers informed Adekunle of her arrival, and he allegedly gave the order for the officers to remove her before she could speak with the commander.

The police begged Blessing not to report because it may harm the DPO's career, according to Blessing. They carried me to the DPO at the Adeeke police station while they were bowed down.

According to Blessing, the DPO then offered her N15,000 and brought her back to the hospital to rehabilitate her leg.

Violence in the Osun and Iwo Police Command

Brutality continues to rule at the Osun Police command despite reports condemning the attack on Nigerians by security personnel.

Recall that Tola Azeez was brutalized by the two cops in Odo Ori Market in Iwo, Osun State, during the COVID-19 shutdown as she attempted to purchase medications for her family members at a pharmacy.

Assaulting the woman was caught on camera by the officers. Since then, reports of violence by security personnel and numerous extrajudicial murders in Osun State have surfaced.

The humane treatment of suspects who have been apprehended has been permitted under Section 37(1) of the Nigerian Police (Establishment) Act 2020.

(1) A suspect shall receive humane treatment, taking into account his right to personal dignity, and (b) not be subjected to torture or any other cruel, inhuman, or degrading treatment.

When contacted, SP Yemisi Opalola, a spokeswoman for the Osun State Police Command, claimed the command was unaware of the occurrence.

She stated that the command would look into the situation.

" My 51 year old aunt is pregnant and I was not told because of this;