By WHITEMANCONFESSION (self media writer) | 5 months ago 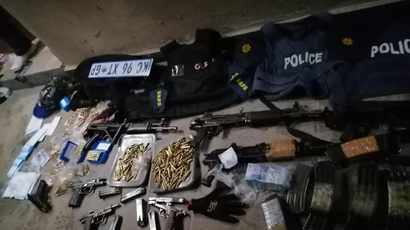 A thousand bullets were discovered when the 11th suspect in the Rosettenville shooting was apprehended by police in a SAPS uniform, a weapon, signal jammers, and a thousand rounds.

Prestigious Pretoria – Police have apprehended an eleventh suspect in relation with the Rosettenville gunfight between several law enforcement units and a gang of suspected thieves on Saturday.

In the streets of Tembisa, the 42-year-old man was approached by police, who discovered in his hands a 9mm handgun. He was arrested and charged with murder.

Mbambo explained that further investigation led investigators to his residence, where they conducted a search that turned up the following items: four assault rifles, five pistols, including the one that was found in his possession, rifle and pistol magazines, more than a thousand rounds of ammunition, channel jammers, G4S and SAPS bulletproof vests, and police uniform.

According to the police, the suspect is thought to be associated with the gang of suspects who were confronted on Monday, February 21, 2022, during a gunfight in Rosettenville, which resulted in the dead shooting of eight suspects and the detention of ten others.

On Wednesday, the 10 suspects who were taken into custody on Monday appeared in court for the first time.

Immediately after their appearance in the Johannesburg Magistrate's Court on Monday, the 10 men who were detained during a multidisciplinary operation in Rosettenville were identified by the Hawks, who revealed their identities.

The following were the names that were made public: