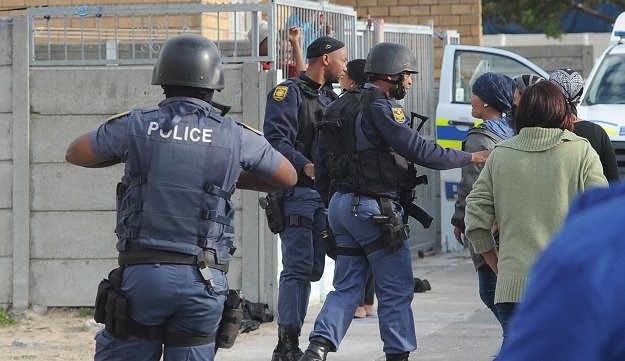 Police officers attend to a crime scene in Mitchells Plain.

On Wednesday, Marlene Van Willingh had the painful task of identifying her son's body in a Cape Town mortuary.

Xavier, her son, was one of nine people killed in gang-related shootings in Tafelsig, Mitchells Plain, in less than two days.

Marlene heard gunshots early Tuesday morning. When she dashed outside, she discovered her son in his father's car.

She explained that he had fallen asleep in the car earlier after smoking, and that she as did not allow smoking in the house.

"I couldn't see him at first because it was so dark, but I did notice the blood, which sent shivers down my spine. When I got closer to the car, I noticed my lovely son's face covered in blood in the back seat "She said

Xavier, 21, was taken to a local hospital by an ambulance.

My boy was fighting for his life for several hours, and I couldn't be near him to tell him that I was right there with him."

When Marlene received the call informing her of her son's death, she was devastated.

I simply closed my eyes and took everything in. I still can't believe he is gone, it is heartbreaking, she said.

Xavier recently turned 21 years old, and his family was planning a joint celebration of the occasion as well as his parents' wedding anniversary.

"However, everything has now come to a halt. "How can we continue to celebrate when my son is no longer alive?" she wondered.

"I wish no parent had to go through the ordeal of identifying their child's lifeless body through a window." I couldn't kiss his cheek or touch him."

Officers responded to a shooting incident on Huguenot Street, where they discovered a white Opel Astra with its back window shattered, according to police spokesperson Captain FC van Wyk.

"A 21-year-old man was found inside the vehicle. A gunshot wound to the face had been sustained by the victim. "The victim was taken to the hospital for treatment," Van Wyk added.

Initially, police were looking into an attempted murder case. He claimed the motive was gang-related. There have been no arrests.