Granny Is Really Suffering After Her Pension Was Suspended By SASSA, See Sad Story

She lives on a part-time job washing clothes for people or cleaning the yard to get something to eat.

She even insults that Sassa's clerks have simply taken away her pension . 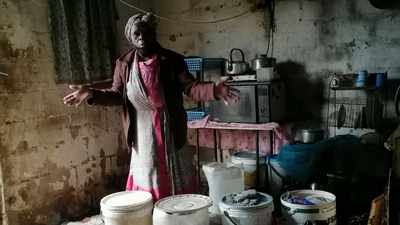 SHe said when she went to lead the center in December last year she was told that someone had paid the money the day before.

SHe said she was later told she was using the same ID number as another person from KwaMaphumulo, which is her hometown.

She then said that the Sassas and Home Affairs were arguing about her , pointing her from side to side but to no avail.

SHe said the situation had led her to go out and wash people's clothes, clean houses and yards or collect cans, bottles and tools to sell in order to earn money to buy food and electricity.

She said the money could also help her when she went to fetch blood pressure pills from the clinic.

“While I was taking the lead, a sheet of paper came out of the machine stating that the money had been withdrawn the day before. I also went to the police and told them to go to Sassa's house, only to discover that someone had stolen my money. The man went to the store and took the furniture on credit, '' she said.

Mrs Khuzwayo said she even went to KwaMaphumulo to collect her parents' IDs which were needed. She says she started earning three years ago.

When you get to Mrs Khuzwayo's house you are greeted by a broken door that you go inside and see cracked walls. On the floor she has placed bowls and buckets to collect the droplets that enter the roof of the RDP house she came to in 2005.

She arrived at his house without electricity and it rained on the door .

SHe said Sassa's Chatsworth offices had already been demolished if she would follow up on her pension.

Sassa KwaZulu Natal spokeswoman Sandy Godlwana initially apologized to Khuzwayo and said they sympathized with her.

She said anyone with a problem like hers had gone to Home Affairs, had his thumbs up and made a report, Hanis, to take it to Sassa.

“Sassa then conducted an investigation to find out who was the one who should earn the money between the two people who earn it. He said it was closed to the one who had been earning it fraudulently and all the money he had earned was improperly and legal action should be taken, ”said Godlwana.

SHe said they would help Ms Khuzwayo earn her money and contact their KwaMaphumulo office for an investigation.