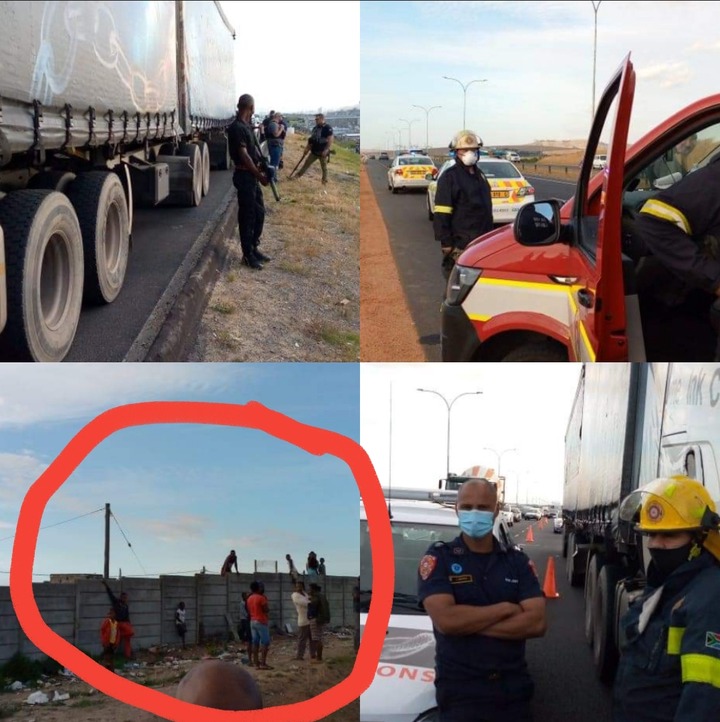 Earlier pics at dunoon on the N7. This is where it is believed that the attack was launched against this truck driver who was not suspecting that he was going to get attacked he was beaten severely, and he took off running in the opposite direction fortunately enough the security officers in the vicinity they did manage to stop the looting.

Time link driver was pistol whipped and as he ran away knocked by a car - he has few injuries but he will survive, these attacks are something that has been a concern to the government to such an extent where they are accelerating their plans to build bridges that would be an alternative to using the info and having to come across these individuals.

However this incident occurred on the insert in and we still have such problems, because these are the main roads that people cannot avoid and that is where the perpetrators of crimes are lurking in order to take advantage of the victims.

We won't post the pics of driver because his family shouldn't see those pics on social media, this clearly shows the scale of the attack which was lodged against this gentleman he was not really given a chance that is why many members of the public are concerned.

Time link had about 30 odd security guards go immediately to assist the driver, and keep the looters at bay.

It was the looters who pistol whipped the driver and stole his possessions, this is clearly an incident that is filled with a lot of criminal elements we know very well that these looters are often sent by such individuals.

They then take advantage of the fact that ordinary members of the public are going to get into the looting, and the criminal element is then lost in that whole commotion.

The Money Was Looted By Standers In Capetown. Details

When You See This Man, Run For Your Life |See What He Is Doing SA To People