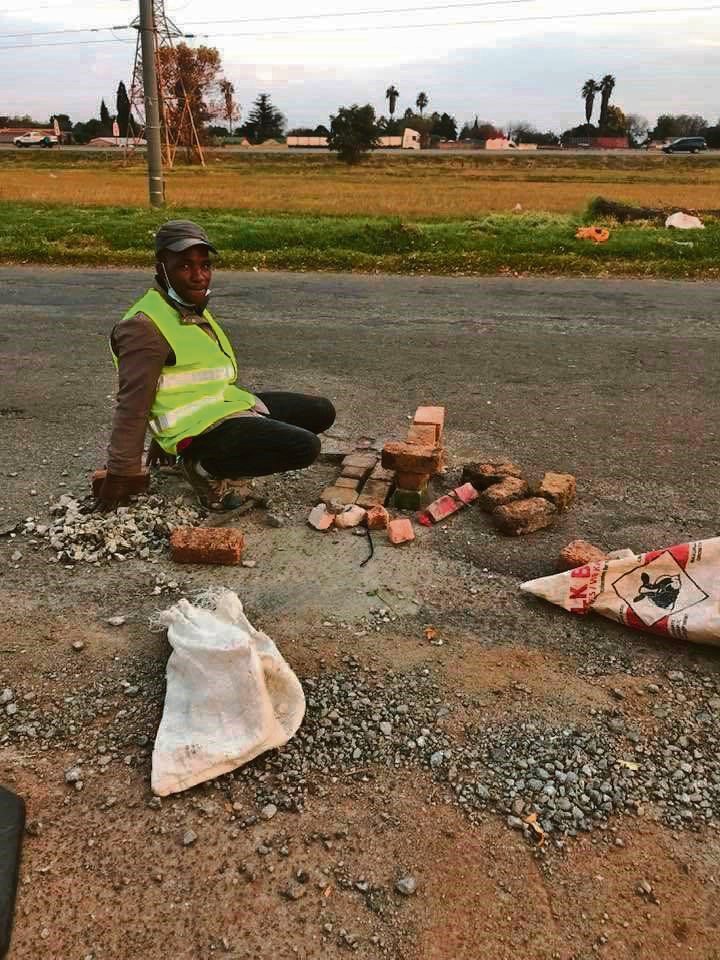 Jack Mkhabela said he’s thankful to the folks who totally support what he does throughout the neighborhood.

A POTHOLES “brigadier” is mending big potholes in Ekurhuleni.

And he thinks his passion for his profession will soon open doors for him.

He experienced various obstacles along the road, but none of them were enough to stop him.

The 31-year-old from Tsakane in Ekurhuleni claimed he was hunting for a job when the idea struck him.

“I’ve been seeking for a job for years.

When I began filling these potholes, I did it out of love and the hope that someone would notice how passionate I am and employ me,” stated Jack.

He stated he gathers bricks from destroyed houses and buys cement with the money people give him when they watch him conduct this task.

But other people stare at him like he is insane and even try to bump him with their autos.

“Fortunately, some individuals actually enjoy and totally support what I do,” stated Jack.

Jack claimed while repairing these potholes, a white guy took him to his location to assist cover several large potholes.

“I was pleased because he promised to pay me and promote me to certain firms.

“But I was not paid after I was done with the task and that guy has been avoiding me ever since.

He said that he has a kid who is seven years old and that he would want to help financially.

"I also want to be able to assist my mom, who is a pensioner, with her money and take all of the weight off of her shoulders," said Jack. "This is something I've always wanted to be able to do for her."

Stefina Tshigo, Jack's mother, is 62 years old and has expressed her pride in her son.

She said that he was thrilled when he began filling up the holes in the road.

He informed me that he is now the potholes brigadier and that he would continue to press until someone acknowledges his job.

She shared her thoughts by stating, "He is really enthusiastic, and I hope that possibilities open up for him."

What Jack is doing is quite popular among users of social media.

According to Knowledge Mabena, a resident of Vandyk, he has seen the stunning work that Jack has created.

"He is doing really well. "I really hope that they take a look at his work and decide to employ him," he stated.

R.I.P. 4 kids Lost Their Lives In A Fire That Was Allegedly Triggered By Loadshedding