Emma Coronel Aispuro, El Chapo's wife arrested in the US near Washington.

By Thedailyamow (self media writer) | 1 year ago 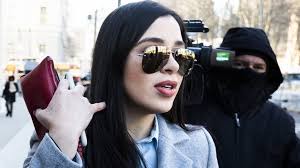 Emma Coronel Aispuro,( 31) wife of the former Mexican Sinaloa drug Carter boss, El Chapo Guzman was arrested and charged with helping her husband continue to run the drug trafficking Cartel while he was behind bars.

Emma was a regular attendee at during her husband's highly classified trial two years ago, where El Chapo was charged for trafficking tons of drugs in the USA. She was arrested at Dulles international Airport in Northern Virginia.

Coronel was charged by the US department of Justice with conspiring to distribute cocaine, heroin, Marijuana and methamphetamine for unlawful importation in the US.

She is expected to appear in the federal court in Washington DC on Tuesday. Also an affidavit along with the charges that alleged she had a hand in her husband's escape from a Mexican prison in 2015 and a second attempt in 2016 before he was extradited to the United States.

Nothing much was heard from her defense team so far and lawyers in Mexico linked to the Guzman family did not respond to any comments.

The charges relate to an alleged trafficking activity between 2014 and 2017 prior to the high profile Brooklyn trial where Guzman was convicted on drug trafficking offenses. The indictment documents said Coronel relayed messages on behalf of Guzman to facilitate drug trafficking after his arrest in 2014.

Prosecutors said Coronel conspired to aid her husband in his july 2015 escape from the Altiplano prison in Mexico through a 1.6 kilometers long tunnel from his cell.

An unnamed cooperating witness was paid $1 million to help

Facilitate a failed second escape a year later according to the affidavit.

Tomas Guevara, whom is an investigator in security issues at the Autonomous University of Sinaloa, said Coronel's arrest might be part of a pressure tool to prompt cooperation from Guzman.

Content created and supplied by: Thedailyamow (via Opera News )

The Weirdest and Sexiest Swimwear Outfits in The World

The Strongest Air Forces of the World in 2022

Foreigners have nowhere to run in SA. He was found stealing this & See what happened to him

Foreigners Think They Run SA. One Of Them Gets 16 Years In Jail For Doing This. Mzansi Is Saddened.