“If you can’t drink blood, you can’t be like us” -This set of guys brag in a convoy of luxury cars.

By CloudZero (self media writer) | 20 days ago

“If you can’t drink blood, you can’t be like us” – Offinso guys brag in a convoy of luxury cars 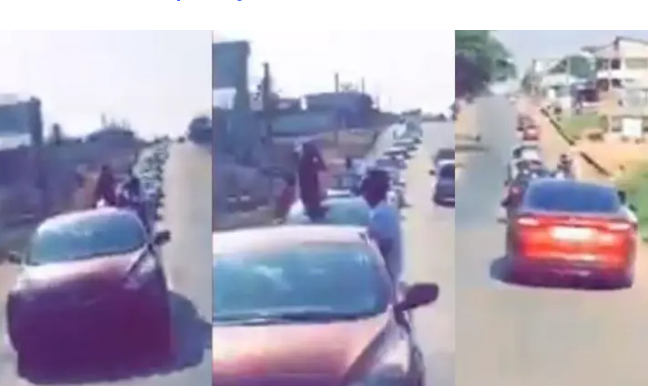 The police have been tasked by the paramount chief of Offinso in the Ashanti region to create a strategy to deal with the troubling practice of money rituals and suspected connected deaths that are taking place in the municipality.

"If you can't drink blood, you can't be like us," the Offinso gang members boast as they ride in a convoy of expensive automobiles (video)

Residents are living in terror as a result of the disappearance of many individuals, including a 4-year-old child who was subsequently discovered to have been slain.

Efforts to put an end to the money-making rituals known as Sakawa in Offinso have been prompted by a viral film that has gone viral on the internet, showing a group of young guys driving a convoy of expensive automobiles while boasting that "if you can't drink blood, you can't be like us."

The tendency of young males purchasing fancy automobiles when the source of their income cannot be determined, according to locals who claim to be living in terror, has become the rule of the day in Offinso, according to those living in fear.

It was indicated that they were concerned about the fading grandeur of Offinso, which was once a tranquil municipality with a positive reputation.

Erastus Asare Donkor of Joy News spoke with Nana Yaw Kobia Amenfi, the senior linguist to the paramount chief of Offinso, who stated that traditional authorities had met with their security counterparts and other stakeholders to find a solution to the current level of insecurity in the area.

According to reports, police believe it will be difficult to apprehend the young guys driving fancy automobiles if there is no evidence that they are involved for the deaths and disappearances. They have, on the other hand, enhanced their visibility inside the municipality.

4 pupils abducted while in their school transport in Polokwane

Good news from the department of education

New Hyundai i30N | Is it possible for something to be fantastic but leave you cold?