Sheep in the boot of a car discovered - Two arrested

By Phillipkitimi (self media writer) | 22 days ago

On the R31 road near Kimberley, two men were arrested for stock theft after police discovered a tied-up sheep in the boot of their vehicle. 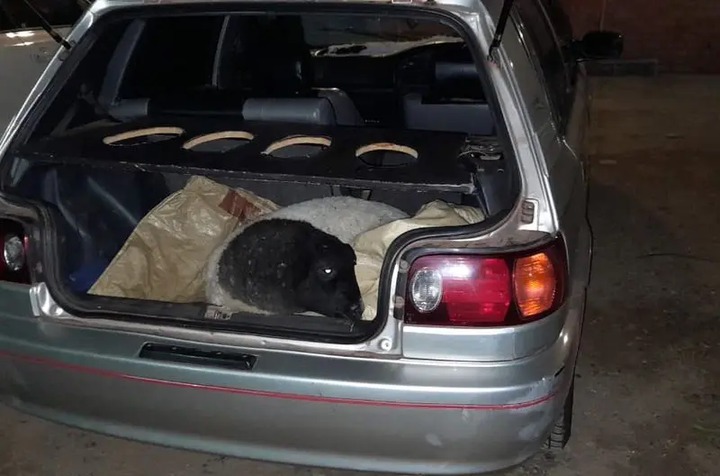 THE VEHICLE WAS PULLED OVER BY POLICE IN THE EARLY HOURS OF FRIDAY.

Delportshoop police got a tip, according to Captain Olebogeng Tawana, a police spokesperson.

“Police in Delportshoop received an information about a silver-grey Toyota Tazz traveling from Postmasburg to Kimberley on the R31 route, possibly carrying stolen livestock.

The accused Toyota Tazz was located on the R31 near Delportshoop after police responded quickly to the alert.”

Tawana stated that the vehicle was stopped and searched.

“Police discovered one sheep with its feet tied stowed in the boot of the vehicle during the search. The suspects were unable to provide a convincing explanation for who the real owner was. Since the suspects failed to verify ownership, the Kimberley Stock Theft and Endangered Species Unit is investigating to determine who owns what.”

On Monday, October 4, 2021, the two men are scheduled to appear in the Barkly West Magistrates' Court.

“The South African Police Service continues to urge livestock owners to tattoo, and brand mark their animals since livestock that has been tattooed or brand marked can be easily identified when stolen or lost.”

Major General Johan Bean, the Frances Baard District Commissioner, praised Delportshoop police officers for their quick response to the tip, which resulted to the arrest of the perpetrators.