By O.clips (self media writer) | 1 month ago

After making an emergency landing in a field outside of Cape Town on Tuesday, a pilot and his student were safe after being rescued from looters.

When they ran into trouble, the two were in the middle of their workout.

The response time from law enforcement was rapid, and they protected the scene.

On Tuesday night, a crowd of local residents in Lower Crossroads, Cape Town, attempted to rob a pilot and his student after the two were involved in a plane crash that occurred in the area.

When they were in the middle of their training, an emergency occurred with their aircraft.

The light aircraft made an emergency landing in Luzuko at approximately 18:00, according to Eckardt Winks, a spokesperson for the City of Cape Town EMS.

A large number of people quickly gathered in the area around the plane. The pilot communicated with air traffic via radio, making an urgent request for assistance and expressing his dissatisfaction with the looting of both the aircraft and their personal belongings.

The Metropolitan Police of Cape Town were the first to arrive on the scene. They were successful in securing the location, which was then followed by the arrival of our law enforcement and traffic services. Winks explained that the fire and rescue services had sent out motor pumps as well as a water tanker.

A nearby flight academy is the proud owner of the aircraft.

"The instructor pilot and the student were in the middle of a flight lesson when they reported that one of the engines had stopped working. They were able to land the plane safely in a field and avoid any injuries that were life-threatening. Both occupants were taken to the hospital for further medical evaluation, according to Winks. 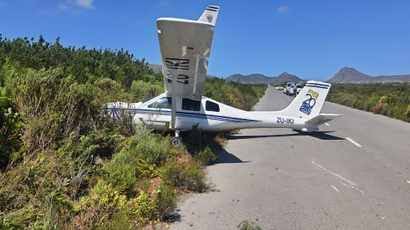 If You Have Sudden Sharp Pain In Your Chest That Disappears Quickly, It Could Be This