By Good_And_The_Bad_News (self media writer) | 2 months ago

On June 10 2022, Tshwane Emergency Services were called to the scene after a bus and truck collided on the M17 at Patryshoek, near Tshwane. The mother of one of the surviving victims of the horrible head-on collision between a bus and a vehicle that killed 15 people and injured 37 others in Tshwane on Friday described the sight as hell.

Francina Kgomo and others who were among the first to arrive at the M17 disaster site near Bundu Inn recalled having to pull bodies off the bus while attempting to save remaining commuters. 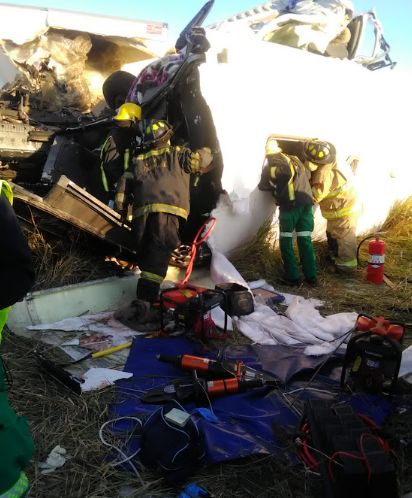 According to Mabaso, when crews got on the scene, they discovered a bus and a truck had crashed head-on, trapping several patients inside both vehicles. 15 individuals were pronounced dead at the spot by paramedics, while 37 were sent to the Dr George Mukhari, Steve Biko Academic, and Kalafong hospitals.

Doctors notified Kgomo that her son, Keabetswe Chira, 27, had died, she claimed outside the Dr George Mukhari hospital on Friday.

She last saw her son in the morning when they switched buses, as they do every day, with her taking the bus to Midrand and he taking the bus to Centurion. Kgomo and Chira ride the same bus from Mothutlung in Brits, then switch buses along the way.

When our Midrand bus came up behind us, I realized I recognized the bus (involved in the accident) and requested to get off. According to Kgomo, the passengers on the other bus were the first to arrive, and they attempted to take all those who were still alive and could walk.

You should have seen me come off the Midrand bus, she said. 'My son,' I was saying. However, with the kindness of God.

Content created and supplied by: Good_And_The_Bad_News (via Opera News )