He's Not My Father; He Is My Boyfriend -Woman Clarifies

By Real_Gist-Don (self media writer) | 20 days ago

He is not my father; rather, he is my boyfriend, as the woman explains. 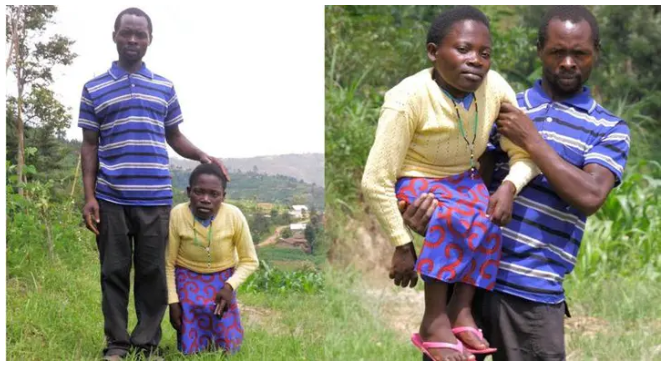 Because of her diminutive stature, Uwiriyingiyimana Odeth, 26 years old, has been bullied by other youngsters, who have referred to her as a dwarf.

To make matters worse, her father was one of the bullies, and he constantly warned her that she would never find a husband because of her height, which she believed.

Despite the fact that she was born in 1995, her father declined to send her to school because he did not believe in her abilities. Every day, he would barricade her in a small room.

In order for him to cease molesting the lady, the local authorities had to intervene. However, he still harbors ill will toward her.

Fortunately, she was enrolled in a vocational school where she learned to weave thanks to the kindness of strangers. She was given a weaving machine, which she put to use in order to make some money for herself.

She could produce beautiful outfits with the machine, and she could use the money she earned to provide for herself, her mother, and her other siblings, because her father had abandoned her and her mother and siblings.

She has now turned to the public for assistance in obtaining a new machine, as the one she had been using to accomplish her work has become beyond repair.

Another fascinating development is that a man named as Dushirimana Celestin has fallen in love with her and plans to marry her despite her little stature.

According to him, it was the bullying she had endured from others, including her own father, that caused him to fall in love with her.

Despite the fact that he is also being bullied by other members of the community as a result of his decision, he has resolved to make the lady his wife and to start a family with her.

In a video broadcast, Afrimax TV has emphasized Odeth's suffering and her love story with Celestin, as well as their relationship.