By Blackie_Nkuna (self media writer) | 5 months ago

Andile Mpisane is officially off the market as he has just got married to his girlfriend Tamia Louw. The couple signed their marriage certificate on Friday witnessed by family and friends. This wedding has now became the talk of the town, not because of it's glamour but because of the drama it has caused. Andile Mpisane has just bought his now Ex a BMW M4 in November 2021, fast forward he just got married to Tamia instead of Sithelo. Mamkhize was just spotted in the moment being more excited than the couple.

Mamkhize being more excited about the wedding than the couple, could it mean that she’s more happy for her son finally getting married? Or is it because apparently the family didn’t love Sithelo? 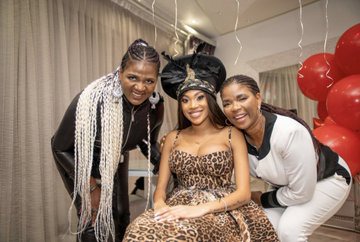 So long Andile Mpisane was dating Sithelo and they were seen to be a happy couple and she has been with him through ‘thick and thin’ and it is believed by many but now Andile marry another girl instead of her. Many social media users believes that this happened because the family didn’t love Sithelo because of her behavior.

Another twitter user posted saying that she’s surprised to see people feeling sorry for Sithelo after she abused another woman up until she got a divorce. It is said that the woman is Thandeka Sibiya, they further added a reference of what happened back then. It is said that Thandeka Sibiya fell pregnant for her then husband, then Sithelo bullied her, called her kid ugly and that in the end it was too much for Thandeka so she decided to divorce her husband. Many believes that Mamkhize is a villain to be supporting her son for significantly dating women that are older to him and that the is nothing healthy in Andile getting into serious relationship since Andile still runs to his mom for anything even a personal matter.

What is your view on this Andile and Sithelo saga?

Do you sympathise with Sithelo or you think it’s karma?

Lets hear your views on this matter.

Content created and supplied by: Blackie_Nkuna (via Opera News )