By HlengyD (self media writer) | 1 month ago

Traditional marriage can be both customary or civil marriage. But most polygamy marriage s are customary marriages.

The Xhosa people are a Bantu group native to Southern Africa.

Marriage was virilical, which means that a wife resided with her husband and his people.

Marriage was also polygynous, and chiefs and wealthy men with large herds of cattle married more than one wife and, in some instances, had as many as four or more wives.

When a Xhosa woman getting married the entire village celebrates with her and is seen as a blessing from God.

The term is called ‘Ukuthwala’. This is where a groom will choose a partner to marry and once the lucky person is chosen. The groom will inform his family and approach the bride’s family.

They will discuss their desires and reach an agreement followed by the bride-to-be being asked to spend the night with the groom’s family.

This is a form of acknowledgement of the marriage.But the method of ukuthwala has become unpopular because it was thought to be associated with kidnapping of young girls and forcing them into marriages.

Which is frowned at by the law and modem society. But in actual sense, Ukuthwala is not so, even though the method has changed. Instead a formal marriage proposal takes place, and only if accepted withthe lobola negotiations.

The groom family will pay lobola to bride family as cattles in the form of money.

Then the bride family will also gives gifts to groom family during the traditional wedding. 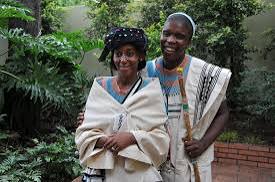 Content created and supplied by: HlengyD (via Opera News )